The Castle Lapidarium is located on the I. castle courtyard courtyard under the northern wing of the New Burgrave\'s House. The Lapidarium interior is at basement level from the north, while from the south it is deep under the level of the courtyard. This Lapidarium, together with the cellars of Prague Castle, is unique in the castle architecture of all of Central Europe.

The main cellar area, originally unified, is 48 m long and 8.5 meters high, while the wagon vault of the cellar is 4.6 m high at its peak. The room has retained its Renaissance appearance up to the present. In the 16th century the cellars served as stables, and according to archival information up to one hundred horses could have been kept here. The window segments are five-sided, confirming the Renaissance origin of these rooms which were built around 1580. The western part of the cellars were modified by a younger Baroque wall which now divides the area. There is access to other cellar spaces from the eastern side which, as archival sources indicate, were used as a prison in the 19th century. The present-day entrance to the cellars is original, and was separated from the I. courtyard by a moat in the 16th century. This moat was localised during archaeological excavations in 1997 in the area of today\'s carriage houses. 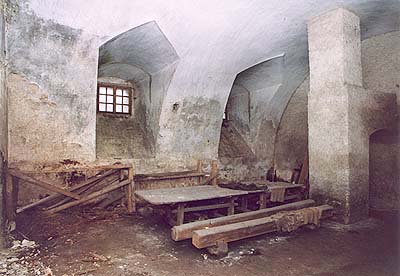 The recent reconstruction of these spaces revolved around the fundamental philosophy of respecting the original spaces:

The spaces have been newly arranged and are now used as a lapidarium, where all originals of castle statues have been placed following their on-site replacement with replicas. The Castle Lapidarium now serves as an independent expositional space, accessible by the public.

Individual statues in the Castle Lapidarium exposition :
(as seen from the main entrance)

Statues from the Cascade fountain : 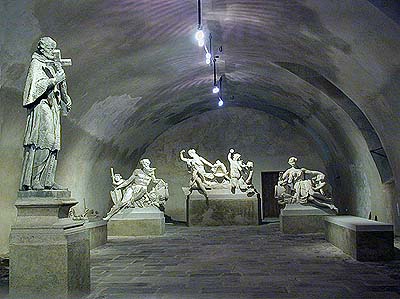 The bearded river god Akis is sitting on flat stones. He has a laurel on his head and a harvest in front of him - grapes, corn sheaf, vegetables and reed. With his left hand he is leaning on an overturned urn and in his right hand holds a paddle on which a naked boy is leaning. River god Akis was killed by his rival, the jealous one-eyed giant Polyphemos, because Akis loved the nymph Galateia. After his death Galateia transmogrified him into a river god from whose body water streams. Water is streaming from the urn, also his attribute. Another attribute of the river god is a paddle. 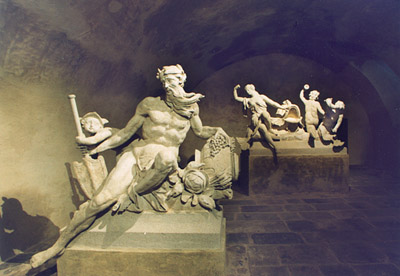 This female figure from the central statuary has a mace in her right hand, a symbol of rule, and her left hand is placed on a dolphin\'s head. Water spouts from the dolphin\'s head. The statuary is also completed with a couple of tritons - boys with dancing fish tails instead of legs who wind the shells during festivals. The nymph Galateia is a figure from Greek mythology. This nymph was the daughter of the sea god Nereos whose daughters were called nymphs or Nereides. Nymph Galateia was loved by the one-eyed giant Polyphemos who was jealous of his love rival, Akis. The giant Polypheme hurled a big stone at Akis and killed him. Galateia transmogrified Akis\' blood into spring water and himself into a river god. 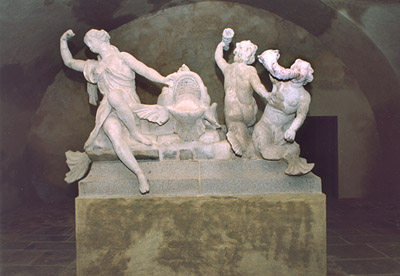 Nymph with pearl and Silenos

This sitting nymph holds pearls in her right hand while shells with more pearls are placed under the same hand at her foot. Near her left side is Silenos, a boy with goat legs and hooves. 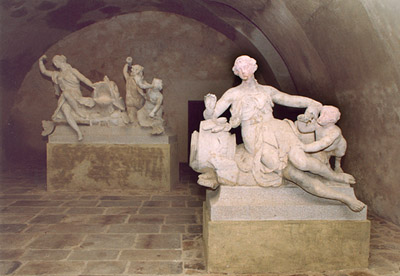 Sculptures of fishes and frogs

These sculptures decorated the first fountain cascade in the Castle garden. Water spouted from their mouths 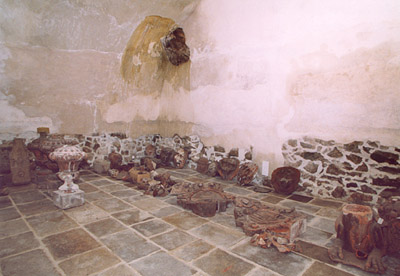