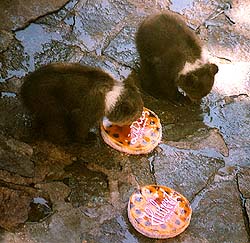 For at least four centuries, the castle in Český Krumlov has been able to boast of bear keeping. Bears have been kept in the moat between the Ist and IInd castle courtyards since 1707. At present the bear couple Vok and Kateřina are found in the moat with their two cubs, born in 1994. Their birth was reason for great celebration, as these two cubs were the first to be born and successfully raised after 27 years. On the occasion of the cubs´ birth a poll was announced in the local newspaper, in which readers were invited to choose names for the furry newborns, which immediately became a living attraction notably for the youngest visitors to the castle. The names which were chosen in the poll are Daxi and Hubert. The festive "christening party", however, was only held 6 months after the cubs´ birth because the mother bear Kateřina conscientiously protected her offspring the whole time, and noone except for the bearkeeper Jan Černý was allowed to approach them. On the day of the festive "christening" the bear cubs showed up in public in the enclosure. Each little bear had its own godfather and was greeted by an awaiting sweetcake. Ever since, on 6th January of each year which is the bears´ birthday, the bears´ admirers have gathered together along the castle moat to watch the bears devour a birthday cake garnished with rolled wafers in place of candles.

Bear Daxi died in 1998. He suffered from congential heart disease, what unfortunately no one knew. Draxi did not survive dosage of anaesthetic which he got for transport from Český Krumlov to Chomutov. Hubert returned to bear moat in 2000 with new mate Marie Terezie. We hope that they will continue in tradition of sucessful breeding of the brown bear in Český Krumlov. 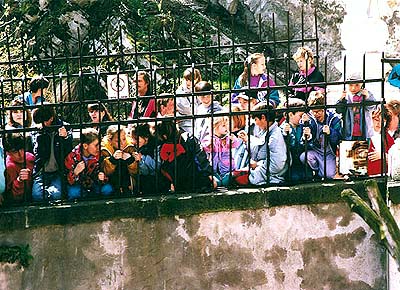 The greatest bear festivals have been held at the castle on Christmas Eve for ten years every year. Celebrating Christmas with the bears was originally intended as an assistance to parents with impatient children who couldn\'t wait to see what present they would get under the Christmas tree. Over the course of time, both young and adult visitors have began to look forward to the Christmas bear festivals. On Christmas Eve 1997, the number of visitors reached 600 people. On Christmas Eve a group of bear friends led by the bearkeeper Jan Černý set out for the castle moat at 6 a.m., place several 6- to 7-meter-tall spruces decorated with sweets, gingerbread, biscuits, Christmas cookies, and a variety of fruits. All the cookies must be fixed on a thread that will dissolve when eaten. The first impatient visitors already begin showing up at 8 a.m. As an entrance fee they bring all kinds of sweet pastries, apples, vegetables, Christmas biscuits and honey. Children may take all the presents down to the castle moat and place them under the decorated Christmas tree, all done under the supervision of the bearkeeper who checks everything out to see that nothing harmful is given to the bears. It is only on Christmas Eve that the bear moat is freely accessible to all curious visitors while the bears wait patiently in their rooms.

The bears get such a festive menu only exceptionally because they are usually fed with a different and healthier diet. They eat 160 kilograms of pastry a week, while an indispensable part of their menu is cottage cheese, yogurt, fruits, vegetables, glucose and honey. Acquiring food for the bears would not be possible if it were not for the kind contributions of sponsors and smaller donations from visitors, which are put into the "bear money-box" placed near the bear moat. 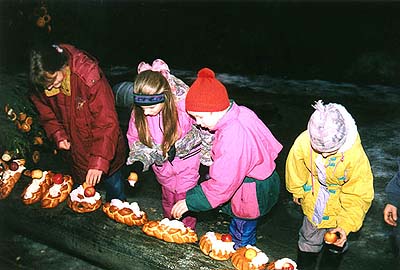 Every year the Christmas bear festival is enriched by the music group "Kapka", which sings and plays Czech Christmas carols. But it is not only the bears who get presents - there are a variety of presents, sweets, chocolates, calendars, toys, writing utensils, all centered around the theme of bears in a certain way, ready for all children visitors as well as Christmas punch for the grown-ups. By 10 a.m. the moat is festively decorated and there are piles of presents for the bears under several Christmas trees. All visitors have already left the enclosures and from a safe place on the bridge, they watch the bears be let out. The bears go at the prepared delicacies with relish. They never leave out a single cake under the Christmas tree, and soon not a crumb is left of the sweet feast. Now that the bears have celebrated their Christmas, the children can go back home, satisfied that they\'ve made the bears happy, and guess what waits for them under the Christmas tree. 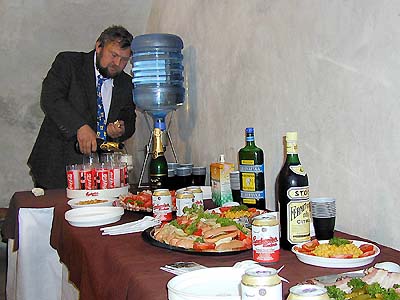 The bear festivals are held regularly, and as the bearkeeper Jan Černý has put it, they are to contribute to people´s respect for bears because these graceful animals deserve more attention all year round and not only on the occasion of the festivals. For this reason, the bearkeeper Jan Černý regularly gives talks in schools and kindergartens about bearkeeping at the Český Krumlov Castle.