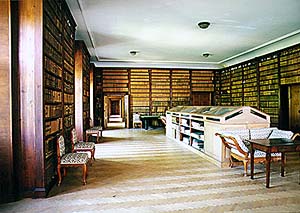 The first references to the existence of a Library in the Český Krumlov Castle come from the 14th century. A larger development of literary culture, however, didn\'t start until under the administration of Petr IV. von Rosenberg (1462 - 1523). He studied at the Italian schools with Bohuslav Hasištejnský z Lobkovic, and from Italy he brought some incunabula for the Castle Library. The personal Libraries of the last Rosenbergs, Wilhelm von Rosenberg (1535 - 1592) and Petr Wok von Rosenberg (1539 - 1611) reached European renown. Whereas the older Wilhelm, as a politician and Czech representative of catholic aristocracy, had a sober practical relation to literature and to culture in general, the younger brother Peter Wok von Rosenberg became an enthusiastic bibliophile and created the Renaissance book collection as a consequence of his sprightly interest in reading materials. Based on the first catalogue dated 1573, it contained Protestant religious literature (Huss, Calvin, Luther), but the Decrees of the Trident Council as well, European nations\' history booklets, and fiction like "UMÉNÍ MILOVAT" (The Art of Loving) by Ovidius, richly illustrated "LOD BLAZNU" (Ship of Fools) by Brandt, or the artistic adaptation of stories by Eulenspiegl. It did not lack philosophical, rhetorical, juridical, natural scientific and medical scientific booklets, nor practical handbooks - for example about the tournaments. The Library was increased many times over under the administration of Václav Březan, a Rosenberg archivist and librarian. In the beginning of the 17th century it consisted of 11,000 booklets. During 1601 - 1602, the Library was moved to the castle of Třeboň. The Castle Library was consequently established again in 1622 when the Eggenbergers entered the estate of Český Krumlov. 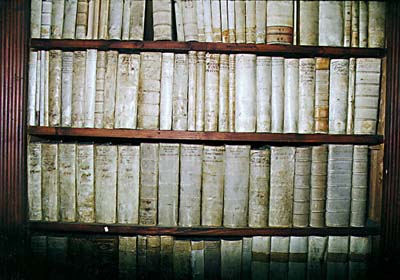 The Eggenberg Library in the Český Krumlov Castle is the successor to that of the Rosenbergs and has its Renaissance roots. Johann Ulrich von Eggenberg (1568 - 1634) was its founder. He was a friend of Valdštejn and an Austrian diplomat, bringing particularly Spanish and Italian books from his diplomatic journeys. Starting in 1583 he inscribed the slogan "Homines sumus" and often data about when and how the book was obtained or read, eventually other notes, on the covers and end-papers of his books. Based on these data, we can consider how the Eggenberg Library grew and of its composition. The information about its enlargement under the other Eggenberg government can be also acquired from the book\'s inventories and catalogues usually drawn up after the death of family members, due to the fact that the books had been their personal property. An inventory dated 1649, written up after the death of Johann Anton I. von Eggenberg (1610 - 1649) states 1,060 books sorted as per format. These are mostly books in Italian and Spanish, some books in Latin, and French and German titles are few. Science and fiction found their place there as well, in original version or translation. It is worthy to mention the essay on French language Trattato della lingua Francesse et Italiana, published in 1638 in Rome and indicated with the heraldic "supralibros". The author, G. A. Longchamps, dedicated that print to Johann Anton von Eggenberg, who the time had been an Imperial diplomat at the Pontifical Court. 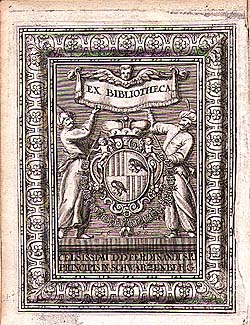 In the second half of the 17th century the Eggenberg Library fund increased to the number of 2,296 booklets, primarily thanks to princess Marie Ernestine von Eggenberg, née princess zu Schwarzenberg (1649 - 1719). She was the wife of Johann Christian I. von Eggenberg (1641 - 1710), who assumed the administration of his dynasty possession in Bohemia in 1664. The married couple shared a common interest in art, and in the 1680\'s turned Český Krumlov into a beautiful Baroque seat with court painters, a Castle orchestra, a Baroque theater and a large Library. Marie Ernestine took care of the careful bookbinding and established the complete Baroque collection filled as per her selection up to now in the so-called Hall of Eggenbergs. It contains books in white leather binding indicated on both sides by gilded supralibros, composed from the initials of the first names ME (Marie Ernestine) under the princely coronet. The books were sorted by languages: German (A - 632 titles), French (B - 788 titles), Italian (C - 557 titles), Latin (D - 141 titles), Spanish (124 titles), and under the reference F, there are 54 geographic booklets. Each language collection is then internally divided into 4 - 9 subsections based on the subject or the genre. The mentioned status is defined in the manuscript inheritance catalogue made out during 1719 - 1721 as an inheritance list after the property acceptance by Adam Franz zu Schwarzenberg (1680 - 1732). In the Eggenberg Library, historical, political literature of the time, and fiction predominate the collection respectively. The visible orientation on the Roman languages is evident from the standpoint of languages.

A more substantial part of the book collection of the recent Castle Library comes from the original Schwarzenberg Library, returned to Český Krumlov from Vienna in 1839. Its founder was Marie Ernestine´s brother, Ferdinand zu Schwarzenberg (1652 - 1703). He marked his books by a copperplate engraving of heraldic exlibris with the name and the date 1690, on which are two Turks holding the coat of arms and the nameplate. His successors would progressively exchange the marked year and name: Adam Franz 1704, Adam Franz 1712, Joseph 1732, Joseph Adam 1782. By the Schwarzenberg exlibris dated 1712 indicates for example: richly illustrated reedition with comments (La Duchette´s publication) of Pantagruela by Rabelais, published in Amsterdam in 1711 by the care of publisher Henri Bordesius. The literary interest of the Schwarzenbergs was directed towards scientific and practically educational literature. At the end of the 18th century, the total number of 4,606 books was apportioned to 1,765 books of fiction and poetry only. The encyclopedic character of the Schwarzenberg Castle Library was even kept in the 19th century, when the number of books reached over 18,000 titles. At that time, the original superiority of Roman literature began to be exchanged for German. The Schwarzenberg Library thus exceeded its owners reader\'s capability and gained a universal character.

At the end of the 19th century, the Library was replaced to the present Mirror Hall (formerly called the Small Dancing Hall as well). During 1912 - 1913 the Library was transferred into two Castle rooms, the recent Hall of Runk and Hall of coat-of-arms. Dr. Karel Tannich an archivist, arranged it there as per the Berlin University library example and provided it with a proper author\'s and card catalogue. In the year 1930 the Library was moved to the front wing of the former Burgrave´s House, where it can be found today. Thanks to the employees of the National Museum of Prague (the Castle Library Section), the 4-volume local and book catalogue (the authors: Ivo Beneš and Václav Slanec) was compiled during 1961 - 1964. It contains 22,844 inventory items, and number of volumes fluctuates at about 55,000. The book\'s collection of that Library, with its extent as well as with its contents ranks among the most important and the most preserved Castle book\'s collections in our country, and nowadays serves in particular for research projects.