Building of the Lower castle with attached Castle tower at II. chateau courtyard is supposed to be the oldest part of Krumlov´s castle (Chateau Český Krumlov during the Gothic period). It is presupposed that Lower castle has been since the middle of the 13th Century till construction of new Upper castle a seat of Krumlov and later on the Rožmberk´s branch of family Vítkovci. Present shape of Lower castle and tower is result of renaissance reconstruction from the end of the 16th Century, designed probably by Baldassaro Maggi from Arogno, who had been working for Vilém of Rožmberk.1) (Renaissance reconstruction of chateau Český Krumlov) 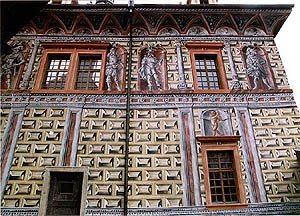 The renaissance Lower castle has been always very interesing because of its prize look, dominant location and outstanding painting decoration.Very often is being reminded a laudatory assessment of the Rožmberk´s archivist Václav Březan (+1618): "there is at the chateau very decorative Lower castle and by it the rotund tower, beautiful and good-looking, which in Bohemia has no rivalry due to its location and shape."2) Basically the same assessment is given to Lower castle with its mural decoration even by modern age.3)

Renovation of mural paintings on Lower castle´s facades in 1995 was just continuation of reconstruction of tower and it ended in 1998. In advance have been processed researches and iconographic analysis 4) needful for decision making about conception of renovation. Historical research and research of archive resources proved, that at least since period of late gothic had Lower castle served as a storage. Its function remained even after the renaissance reconstruction and generous facade decoration. 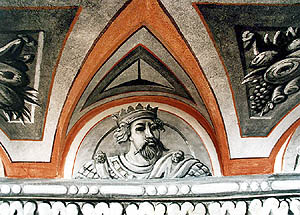 For example in year 1462 the ruler Jan from Rožmberk asks krumlov´s burgrave to send to his sister Anežka "one bellows organs with gold plated pipes which are at Lower castle in smaller room." 5) There is written in inventory from 1545: In Lower castle is stored: 284 spears, 226 lances, 625 buckets of rye at one attic, pea at another one." 6) Suchlike records can be read in inventories from end of the 16 Century and beginning of the 17th one.

Opposite to the proved usage of building of Lower castle remains the iconography interpretation of its mural decoration an opened question. Some professionals thought that decoration of the Lower castle has rather symbolic or allegorical meaning. One from the authors for exemple establishes, that "in case of fresco of Lower Castle is possible to think about figuration of word rulers, uttered on the moulding by illusive busts of famous personalitie, who became almost gods due to their fame."7)

On the other hand exists an opinion that duty of painters was just to illusively architecturally and decoratively complete otherwise strict and plain facades of Lower castle. Figures, whose meaning is not clear, are the greatest part of mural decoration of the Lower castle. Research has partly proved and based on repeated motives deduced that in main moulding uased to be painted 54 men and women heads, in great niches between windows of both floors stays 31 over life size figures, over the first floor are 12 puttis slightly smaller than life size and over the pdestal part are located 21 busts in shell niches.

During decision making about the obligatory conception of 8) restnovation were evaluated three possible methodes: 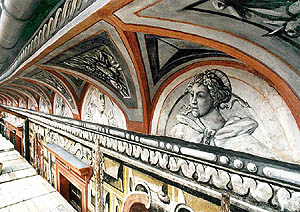 Each of these ariations had its modifications. For the first variation could be used in reasonable cases local or copy retouches of preserved paintings. For the second and third variation would be evaluated rate of retouches of original and corresponding shape and color intensity of reconstruction.

After evaluation of renovation research and discussion of present professionals the third variation had been chosen. During discussions predominated the opinion that basic structure of decoration of Lower castle (just a rhythmical repeating of architectonical and figurative motives) has been reliable diagnosed and that rehablititation of its esthetic and illusive architectonical function is wanted due to architectonical shape of Lower castle and decorative harmony with renoved tower and painted facades in chateau´s location. Problematic question of figurative part of paintings was solved via compromise. Figures were into reconstruction included as illusory sculptural parts of decoration, which absence would destroy basic formal structure of art piece. The formal part has been accented, what means the true evocation of typical renaissance figures, gestures and costumes. The content of figurative motives has been given up by authors without any complications of the further research in this direction.

Renovation proceeded in these steps: the facades of Lower castle were researched, this survey was updated later on during separate stages of reconstruction. Work started at the most preserved part of plaster in year 1995. On the southern side of tower were paintings preserved in size of 2/3 of facade. Restorers at first reconstructed the original paintings, which preserved state with minimum of retouches was a scale for color and shape intensity of reconstruction. For figurative and some illusive architectonic reconstruction were prepared 1:1 cartons, which were approved by commission. At the eastern facade was work very same. At northern and western facade were at first prepared models of paintings in smaller scale. After their approval the separate cartons were created as in case of southern and eastern facade. 9)

Results of researches and information obtained during reconstruction are being in the present time evaluated and will be a part of separate enlarged study. Now can we come only to the preliminary conclusions: Fundamental finding is a fact that facade of Lower castle had probably never been totally reconstructed, which would complicate interpretation of preserved paintings. The only problem is still that the original remains in torso state, because of natural ageing of facade. Related to discussed iconographic program of paintings can be established that nowhere on facade were found any inscription or character which could the figures determine closer. This fact is (compared to formally similiar art pieces from renaissance period) surprising and does not support the interpretations of paintings from Lower castle, which reflect their special iconographic program. As an important discovery appeared a fact, that heads in lunetas at moulding have often caricature characteristics and some of them are even repeated. This fact seriously doubts an opinion that paintings in lunetas picture "busts of famous personalities, which reached eminence of gods." 10)

If we think about the fact that Lower castle served before and after the renaissance renovation as a storage, we can think that decoration of Lower castle had had much more prosaic background. The aim of painters was quickly and cheaply decorate and illusively architectonically finish otherwise stern building of Lower castle. The painters used period repertoire of illusive architectonical and figurative motives, which was available in often used swatches, and which were used even during previous work. Draft of decoration was could design an architect of renaissance reconstruction of Lower castle or painters themselves. These thoughts are only preliminary and must be confirmed by further studies.