The first floor of the Upper Castle consists entirely of the large Baroque Suite. The rooms are furnished as they were originally according to the inventory lists from the 18th century. The suite was approached through a room called the Antecamera. It served as a waiting room before actually entering the typical chambers of the Duke.

The portraits of Duke Adam Franz zu Schwarzenberg (1680 - 1732) and his wife Eleonora Amalie von Lobkovitz by the Viennese artist Maxmilian Hannel represent the first generation of this clan at Krumlov. The rooms are finished off with original period maps. 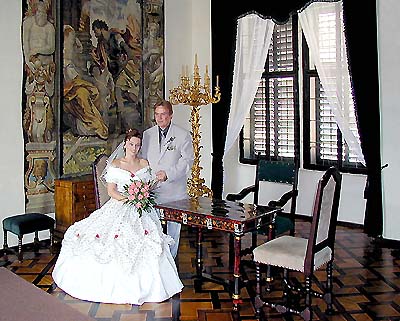 The Eggenberg Hall recalls the government of the Eggenbergs, who ruled here for nearly a century. The portrait gallery contains portraits of the Duke Johann Ulrich (1568 - 1634) and his wife Sidonie Marie von Tannhausen, Johann Anton (1610 - 1649) with his wife Anna Marie von Bayreut, and Johann Christian (1641 - 1710) with his wife Marie Ernestine zu Schwarzenberg. The personality of Johann Christian enriched the cultural history of the castle. The Golden Carriage is a masterpiece of wood-carving and gilding. It was made on the orders of Johann Anton I von Eggenberg in 1638 in Rome on the occasion of a visit to Pope Urban VIII.

The Baroque dining room with furniture from 1720 - 1730 represents the typical chambers measuring up to the highly impressive standards of the period. Tapestries of the cycle "Decius Mus" were woven in 1640 in Brusseles. The cartoons for this series were painted by Peter Paul Rubens. The large portrait shows the Dutchess Eleonora Amalie with her son Joseph Adam zu Schwarzenberg. 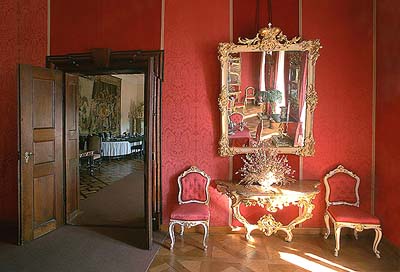 The adjacent Canopy room, named after a sofa with a canopy, was intended for informal visits and social small talk. The fabric wallpaper, the settee in the Rococo style with gilded woodwork, the Venetian mirror and the Oriental accessories create a smart and festive atmosphere.

Originally, the bedroom was not a strictly private place as we imagine today, but had to display quite an impressive character. The four poster bed with a canopy, the tile stove, the mirrors, the furniture and other accessories are typical masterpieces of the Baroque period.

In the bedroom we also find the Oriental cabinet with a painting which imitates the Delft tiles made in 1755 by the artist František Jakub Prokyš, the changing room with the original castle wardrobe, and a private chapel with the original wallpaper, altar and many reliquaries from the first half of the 18th century.

The origins of the Castle Gallery in the Český Krumlov Castle are associated with the high level of cultural life of the third generation of the Eggenbergs. The collection was also added to by their successors, the Schwarzenbergs. The inventory list from 1733 contains 263 pictures. Today, the gallery displays mainly the works of Flemish, Dutch, German, and Italian artists from the second half of the 17th century.

The next two interiors are furnished with furniture and accessories from the Biedermeier period from the beginning of the 19th century. The most interesting pieces in the Smoking room are the smoking table and the collection of pipes from the 18th and 19th century. The paintings, mainly landscapes of Schwarzenberg cities and castles, are the work of the court painter Ferdinand Runk from the years 1810 to 1820. The floral still-life and collection of china in a late Rococo display cabinet give a very gracious look to the interior of the Ladies\' salon, adjacent to the Men\'s Smoking salon.