History of the Masquerade Hall

Today\'s Masquerade Hall was, at that time, designated the Green Room. The first mention of it is in the inventory of the Rosenbergs from 1545. At that time, this large room served as storage for arms and armour - there were, for instance, 56 complete suits of knight\'s armour, front and back parts of harnesses for a hundred infantry men, 97 helmets, 97 large long rifles, 145 halberds, armour for a large number of horses, and two chests containing various pieces of armour.

The period of the last Rosenbergs brought a radical change to the interior of the Green Room. In 1600 the walls were covered with green velvet and damask (9 pieces); in the front of the room was the Rosenberg Coat of Arms, encircled with green brocade and green velvet with golden tassels, two brass chandeliers, and above the wall covers were 27 pictures, and 11 more between the windows. The room also contained a large green tiled stove surrounded by a gilded railing. The room had 12 windows "in-between the stone columns" (part leading to the Jacket Bridge, part to the Courtyard), and two doors - one in the position of today\'s entrance, the other one in the position of today\'s large mirror on the South wall. In this beautifully decorated hall such ceremonial banquets took place, such as the wedding banquet of Rosenberg courtier Adam Tuněchotský from Poběžovice on 5th January 1598, after his wedding to Magdaléna Kunášová from Machovice in the neighbouring hall, known as the Palace.

It is very difficult to assess how impoverished the appearance of this room became after Peter Wok von Rosenberg moved out in 1602. What is certain is that even in the years that followed, it continued to serve as a ceremonial dining room under its original name, which is confirmed in the inventories from 1602 (Green Toflštubn), 1607 (Green Room), 1614 (Green Room), and 1649 (Grünstuben). In the above dated inventories there is always reference to a certain number of large dining tables, chairs, and benches, and the original green tiled stove with the gilded railing.

The first name change can be traced back to the year 1664, when the inventory describes it as "the large hall with a pink floor". The list of rooms in the Český Krumlov Castle from the same year calls it the Large Pink Hall. In 1670 it was called the Deer Hall for the first time: this name was derived from the large number of trophy antlers displayed on the walls. Until the 1670s both names were used - the Pink Hall and the Deer Hall. 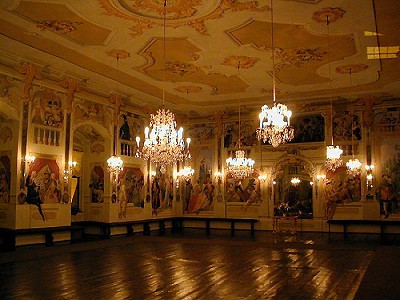 The last Eggenberg in Český Krumlov, Johann Christian, who was devoted to various art forms, used the Deer Hall as a theatre. The first theatre performance was held there in 1670, and between 1675 and 1686 performances took place there on a regular basis. The stage was not installed there permanently, because the hall was used for other social purposes. From the account ledgers we can see items often related to the removal and installation of theatrical equipment.

In 1673, Johann Christian I von Eggenberg was considering yet another reconstruction of the Deer Hall, this time following the style of a Hall in the Viennese residence of Count Traun, which took his fancy on a previous visit. The Hall in Český Krumlov, however, was much larger than the one in Vienna, and he was therefore unable to use the stucco decorations from there. We know the exact measurements of the Deer Hall in 1673. The length was 25m, the width 13.3m, and it was 5.7m high. The original grand plans for the Hall reconstruction were in 1673 reduced to a mere alteration of the floor. The original pink floor (made of either bricks or marble) was replaced by square stone flags. A year later the picture frames and the deer head trophies were completely renovated.

Reports about repairs carried out in the period from 1675-1686 make several references to interiors damaged during theatre performances (broken windows, damaged walls).

In 1686 the Castle carpenter disassembled all the theatre equipment in the "Big Theatre Hall" and transferred it to the newly built Theatre (the winch, columns, scenery, theatre curtains). Soon afterwards the Hall was completely reconstructed.

In or around 1685 a new doorway was broken through into the passageway leading to the Theatre. In 1703 the ceiling of the Hall was strengthened by 12 new rafters.

At the turn of 17th century the Deer Hall saw several occasional theatre performances, as the Eggenberg Theatre proper was out of use by that time.

The arrival of the new owners made quite an unusual impact on the appearance of the interior of the Deer Hall.

In accordance with the wish of Adam František zu Schwarzenberg, they built a small kitchen for the personal use of Prince Josef Adam in the North East corner of the Hall, in 1728. The ducal builder Martinelli was asked to supervise the work. It is likely that for the kitchen where a stove was to operate, the chimney previously used for the green tiled stove became necessary. The original stove must then have been disassembled. The kitchen fell into disuse after some twenty years, but the windows and a kitchen rubbish shut still remain. This explains the shut in the Deer Garden that was sometimes wrongly associated with the castle Brewery, that obviously could not have been situated in today\'s Masquerade Hall.

The Deer Hall of that time served probably as a storage room, as suggested by the inventory of 1733: a pair of stuffed bears (black and white), a crazy box, an old billiard table, two large wire bird cages, two old wardrobes, two old tables, 72 deer trophies, 17 unimportant paintings and etchings. 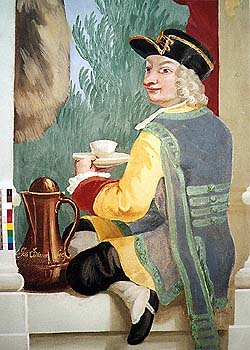 In 1747 and 1748, a complete reconstruction was carried out, the result of which can still be seen today. In the first place, the old kitchen was removed, then old windows were bricked in, and new broken through; the entrance and the door to the passage leading to the Theatre were both widened; the door in the South wall was bricked in; the stone floor was exchanged for a wooden one, and a gallery for the musicians was erected. In 1748, the Viennese painter Josef Lederer decorated the walls of the Hall with figures of theatrical themes, thus the name Masquerade Hall.

Into the newly decorated ceremonial Hall the following items were installed: 5 crystal chandeliers from other various Castle rooms (the Duchess\'s Bedroom, the Duke\'s Reception Room, the Eggenberg Hall); 15 gilded iron candle sconces, 13 long and narrow and 13 round mirrors, and one large mirror for the main wall.

The expensive reconstruction of the Masquerade Hall in 1747 and 1748 falls within the period of the last major reconstruction of the Český Krumlov Castle, when, apart from anything else, the old Mirror Hall, previously known as the Coats of Arms Hall, was removed (see History of the Hall of Mirrors).