At the same time of the construction of the theatre hall of the Castle Theatre in Český Krumlov, the theatre stage scene decorations were created. Literary archival sources inform us of the negotiations underway between Prince Josef Adam zu Schwarzenberg with the renowned fresco painter and architectural artist Josef Hager. An otherwise unknown Jan Marchand wrote the prince on the 9th of January of 1766 that he was sending him three of Hager\'s drawings for the Krumlov theatre representing a portal, a decorative hall, and a room. In the same letter he also writes that the painter is presently working on the other designs, and for the entire theatre project will charge 4,000 gold pieces including paints and assistants. During the next two weeks, Hager finished the designs for the curtain and church, town, and dungeon, and had begun working on the garden scene. In the meantime, however, the prince evidently received a better offer from two Viennese theatre painters, with whom he signed a contract on January 18 of 1766. The painter Hager, his designs unrealized, received 24 ducats for the scetches drawn thus far and for his travel expenses to Krumlov.

Both artists drew their work from the tradition of Viennese theatre art of the early 18th century, most of all on the works of Giuseppe Galli-Bibieny, whose work in some cases served as a direct model.

At the Castle Theatre in Český Krumlov, not only the original curtain has been preserved in precious iconographic completeness, but also all theatre scenes which Wetschel and Märkel created.

The curtain is decorated by a figural allegorical group composed around a central axis with an embellished frame, musical motifs, and a central scene. The painting represents an apotheosis of free art with a scene of Pallas Athene laying a wreath on an obelisk, around whom are fluttering cherubs representing astrology, mathematics, geometry, and geography. 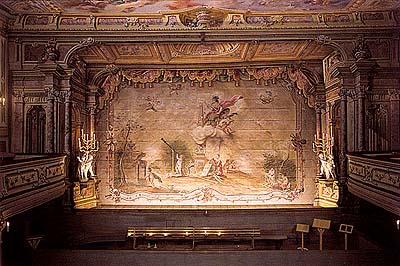 All the exterior scenes continue in perspective into the architcture of the proscenium and stage portal. This creates a smooth transition between the auditorium and stage and completely unifies these spaces (see (Stage of the Castle Theater). Thus a homogenous and uniformly lit theatre space is created, completely in the spirit of high Baroque illusionism in its extreme form. The spatial system of the stage wings creates a sense of receding depth as they converge into the rear of the stage towards the painted backdrop, thus closing the space optically and meaningfully. The exterior scenes use the same cloud and sky suffites. Individual scenes can be modified by minor exchanges or by exchanging the background scenes, thus creating an entirely different scene.

1) Forest scene is made up of five couples of side-wings with paintings of wildly twisted trees which also appear on the backdrop with a view into a picturesque forest landscape with a little bridge crossing a stream.

2) Garden Scene is axially oriented - on the side wings, cypresses and vases, sculptures, walled portigues, alcoves and fountains all alternate regularly and proportionally along the principles of French gardens. The scene closes with a backdrop displaying a bed parterre with sculptures and three gloriets. The garden scene was supplemented with a fountain stand and cypress stands interlaced with garlands of flowers as well as citruss and orange trees with transparent fruits. 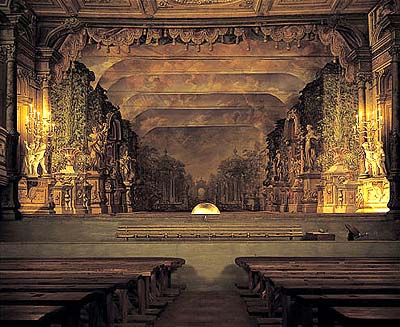 3) Town Scene is formed in the usual way, with four pairs of side-wings with varied architecture on the houses. The backdrop emphasizes a small square with an obelisk fountain, a corner palace, and a pair of streets formed by low one-storeyed gabled houses. The streets diverge into a corner, behind which we see towers and the roofs of a gothic/baroque church above the rooftops. 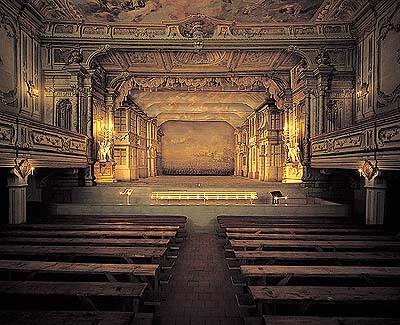 4) Military Camp Scene uses harder shadows and a warmer color scheme than the previous exterior decorations. On the side wings are pictured several rows of tents with onion-copulas, various pieces of military equipment, and weapons with machines of war. On the backdrop we see a wide plateau with military encampments as well as a distant town and mountains in the background.

5) Beseiged Town Scene is formed by supplementing the military camp scene with stands of ramparts with bastions and a gate.

6) Port Scene is formed by a backdrop with a bay with a lighthouse and scattered houses on a rocky shore. It had only one pair of rear wings, from which only the left wing was preserved; it featured the stern of a naval vessel with fluttering banners. The front part of the scene was formed by combining wings of other scenes like the military camp or forest. The sea decoration was supplemented by such details as boats painted on flat stands, a "shark" which was more like a pale blue dolphin with a little pink mouth, low cut strips of waves, and a low-standing barrier which was to represent two areas of a gently rising slope overgrown with vine bushes with transparent grapes.

Each of the interior scenes, following, was always equipped with its own suffite, each representing a ceiling appropriate for the character of each room.

7) Burgher\'s Room Scene consists of wings decorated with walls, the walls divided by massive pillars with capitals upon which are painted a mirror or picture. On the pillars a relieved roof converges in strips. The walls are distinguished with windows or doors, and the backdrop displays an opened door in the center revealing another area behind, while two smaller areas decorate the sides with stoves and a study.

8) Study Scene is similar to the previous scene in its axial arrangement. On the wings, divided by flat pillars with ornaments supporting a flat painted ceiling on vaulted brackets, high windows highlight the scene. The backdrop shows symmetrically arranged portals on the sides with rococo ornaments above the windowsills, while a small area in the center, decorated by a table, is lit by windows. This scene is characterized by its brighter color scheme, using gold and pink, and by more intricate forms of painted architecture.

9) Prison Scene is markedly more complicated than the previous two scenes; the perspective is oblique (so-called Winkelperspektive, maniera di vedere le scene per angolo) and formed by a vaulted prison chamber, complete with instruments of torture, opening into an arcade through two broken arches into a lighter hall and a staircase. This is the narrowest scene, consisting of only two pairs of wings. 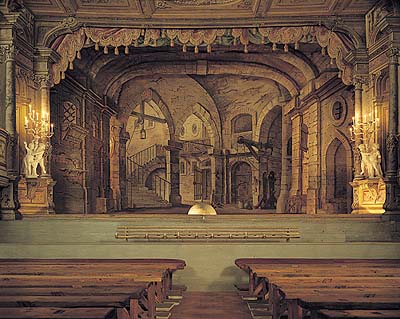 10) Ceremonial Hall Scene, in contrast, is the deepest scene. It is meant to display a complex representative room in the center of a feudal manor. The deep perspective is created by the use of wings showing parts of the architecture with winding columns of blue marble enhanced with scultpures and vases. On the ornate windowsill lies a sculpted relieved ceiling. A second variation of this scene was mentioned in a letter from the prince dated April 1767, as a Church, while notes at the manipulation ropes are marked "deep hall". The church scene is characterized only by a change in the back part of the scene in which a complex-shaped painted dome on two consecutively lined curtains is used, supported by pillars with winding columns, represented by two pairs of flat props, ending in the back with a semicircle apse.

The question of artistic orientation and previous activity of both mentioned painters of the Krumlov decorations remains unclear as far as archival sources are concerned. Based on a comparison of style, it is undoubtable that they both belong to the school of Viennese Baroque, and that they drew inspiration most of all from the works of the most renowned scenographer of the time, Giuseppe Galli-Bibiena.

The garden, street, seaport, study, and prison scenes display some stylistic relationships to his work more or less in individual details, whereas in other scenes the relationship is much closer; in some cases one could speak of outright plagiarism. Especially from the graphic portfolio of Bibiena\'s "Architettura e prostettiva", the scene of the military camp is evidently modelled after the decoration of the Etruscan camp of G. Galli-Bibiena for the Prague Castle\'s presentation of J. J. Fux\'s opera "Costanza e Fortezza" from 1723. The design, however, refers back to the work of Bibiena\'s father Ferdinand as well a C. Nic. Servandoni. In this context it is necessary to mention the close connection with the stage design of the military camp at the castle in Jaroměřice nad Rokytnou, this scene being credited to G. Galli-Bibiena.