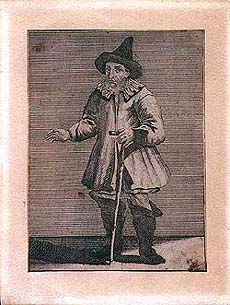 The year 1675 marked the beginning of a more than 17-year history of a permanent professional drama company active in the theatre at the Český Krumlov Castle and elsewhere under the name "Fürstlich-Eggenbergischen Hof-komödianten" (Princely Eggenberg court comedians).

On the 1st of May 1675, Johann Christoph Pernecker was commissioned with his wife Anna. Both came from Vienna and were immediately entrusted with setting up all necessary items for the preparation of a theatre wardrobe. Pernecker was later responsible for all theatre equipment. On the same day, a trio of actors Johan Georg Göttner, Johann Franz Manduck and Johann Karl Sommerhammer was employed, all three as "accountant scribes" with the obligation to perform theatre. A year later Göttner, a native of Moravian Mikulov, was named as head of the company of court actors. In the first year of the theatre, other actors were present such as Andreas Ellesohn with his wife, Friedrich Kornel Pöck, and Joham Schumacher, all who left Krumlov after a few weeks or months, plus Ursula Bumlová, who died in 1676.

The company was markedly supplemented in the spring of 1768, when Göttner\'s wife Sibylla Juliana joined with her sister Claudia Felicitas, Styrian actor Johann Wohlgehoben and Johann Friedrich Schwarz, and in 1680 the comic actor Johann Valentin Petzold (1648 - about 1730), nicknamed Brustfleck, was employed from Styria. From that time the ensemble basically remained unchanged. The married actors led independent households and received salaries and deputy rents from the court, while single actors were accommodated in the town and ate together in the castle servants\' kitchen.

Alongside the "court poet" Göttner, the most renowned member of the company was undoubtedly Johan Valentin Petzold, who brought the Krumlov stage to life with his figure of the village idiot Kilian Brustfleck. 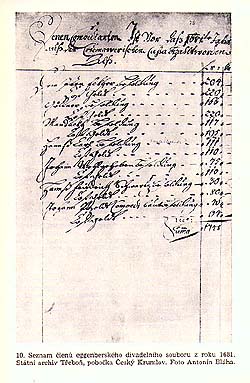 The prince and princess supplied the actors with all necessary material securities comparable to that of a ryoal clerk. In the 1680\'s, Johann Georg Göttner was remarked as the "Hof Poet" (he was the author of several plays performed in the Krumlov theatre), and was even raised to the level of nobility in 1682 by the Prince Johann Christian I. von Eggenberg. Quite certainly the actors were free people who served for a negotiated price and had the right to leave whenver they wanted. The Prince didn\'t prevent his "comedians" from performing outside Krumlov when he didn\'t need their services himself, or when for some serious reason such entertainment was forbidden in Český Krumlov.

The Eggenberg court comedians became gradually well-known even in far-away towns. More than once, the Prince covered the expenses associated with some short-term travels. In 1687 they put on their first performance in Linz, where the upper-Austrian nobility permit them to build a stage in the estates riding school for a period of five years. In 1690 the Krumlov company played in Prague.

Oddly enough, at the time when the actors had a spacious and well-equipped theatre at their disposal in their own domain, they gradually shifted their focus outside of Český Krumlov, and in 1691 they were released from service. The company evidently stayed together, however, and probably with the agreement of their former employer, used the name "Fürstliches-Eggenbergisches Hof-Komödianten". In the 1690\'s they were considered to be one of the most renowned theatre companies travelling through Austrian, Bavarian, and Swiss towns. The leader of the company was Johann Karl Sommerhammer, and among their main members was still the "hanswurst" Petzold, alias Kilian Brustfleck. Whether or not the former princely actors played again after 1691 at their original theatre isn\'t known.