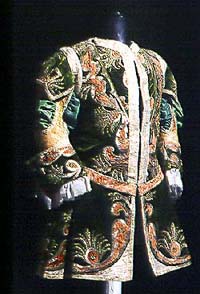 The rich furnishings of the Krumlov castle theatre wardrobe in the era of the Eggenbergs (the last third of the 17th century) can today only be guessed at from the numerous archival documents which contain the amount of materials purchased for costumes in a given year. From this time we only have three costumes preserved up to the present: two sets of men\'s cloth outfits and a black raincoat from silk velvet.

During the 18th and 19th century, the Krumlov wardrobe was gradually expanded. The preserved collection, today amounting to almost 581 items, is very typologically diverse in the sense of the material used and its craftsmanship.

The most attractive, and for the craft artist most valuable, are the several heavily decorated costumes which come from around the 1740\'s and are markedly reminiscent of the beautiful costume designs of the Viennese scenographer and costume designer Antonio Daniel Bertolli. These are undoubtedly costumes for Italian heroic operas (opera seria), and correspond to the Baroque vision of the clothing of an antique hero. Their cuts are quite closely subordinate to the rules of the fashion of that period. Antique elements are marked by only certain elements. In the most obvious case, cloth scales have been sewn onto the shoulders and waist, representing scaled armour on a wine-red jacket. Also reliably approaching antique morphology, but less significant, are other smaller clothing accessories - a sewn silk hat shaped like a helmet, two short cuirasses from scaled metal plates, a collection of metal helmets, and so on.

Also interesting is the fact that on the walls of the Masquerade Hall, painted in 1748 by Josef Lederer, we see figures dressed in costumes which are today stored in the Krumlov wardrobe. We can name for example the black magician\'s and pink "turkish" coats, Pierot\'s white smock, an embroidered south Bohemian folk apron, or a dark purple men\'s costume decorated with golden trim in Renaissance style. 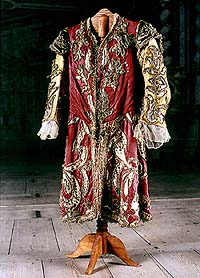 A special place in the collection is set aside for the blue cloth waistcoat, decorated with many green braids and buttons, in which Josef Lederer portrayed himself sitting on the window sill in the Masquerade Hall. 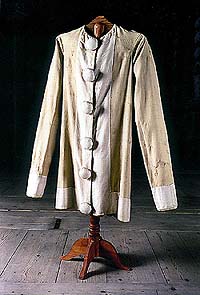 The largest group of Krumlov costumes comes from around the time of the Schwarzenberg theatre reconstruction from 1766 - 1767. When compared to the inventory from 1807, the castle wardrobe contains 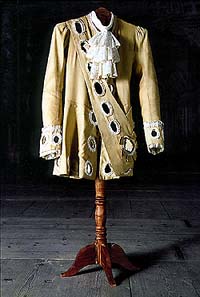 a number of costumes which can be reliably identified. Worth mentioning, for example, is a canvas dancing fisherman\'s costume, outfits for a children\'s dance ensemble, or liveries for the castle capella. We are reminded of the favorite pantomime from Commedie dell\' Arte by the two Pierot smocks, or the striped costumes perhaps belonging to the character of Mezetin.

Even though the origin of some of these props might be later (i.e. a tin dragon), all of them correspond to the tradition of Baroque theatre. They were an indispensible part of the scenery, and with respect to their uniqueness in this situation, their value is exceedingly high.

Certain restored costumes may be presently viewed at the exhibition of Baroque costumes in the building of the Mint on the castle\'s 2nd courtyard (see Castle No. 59 - Mint).