Machinery and Special-effects Equipment in the Castle Theater

The technical equipment (machinery), preserved up to the present in its original condition, is an example of an advanced Baroque theatre mechanism and corresponds with the demands of Baroque theatre. This very precisely and carefully manufactured machinery is produced predominantly for the purpose of exchanging scenes.

By hanging the wings onto sliding frames, which then would move along wooden tracks located under the stage, it was possible to prepare three different scenes at once. A device consisting of a massive wooden shaft with levers, from which ropes led to the wing frames either directly or indirectly through pulleys fastened to frames in the walls, enabled manipulation and movement of the frames. When the shaft was turned, the wings of one scene slid offstage while wings of another scene slid onstage simultaneously.

Similar, albeit smaller, shafts placed above the stage controlled the movement of all backdrops and curtains as well as the suffites. Upon proper coordination of the rope area with the substage area, five or six men would smoothly change the scenes within six to twelve seconds. 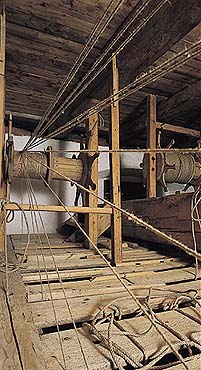 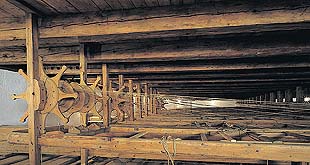 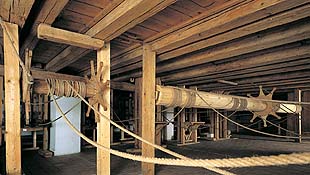 In addition to this scene-changing mechanism, the Stage of the Castle Theater was relatively richly equipped with various features which enabled the use of scenic kinetics. The Baroque love of surprising scenic effects corresponds to the large number of trap doors. 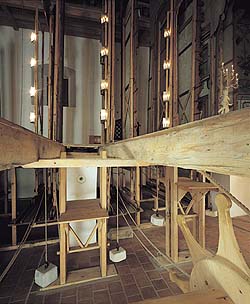 Four wooden lifts were set under the stage floor with which actors could either drop down offstage or be lifted up onto a scene. The stage floor could also be completely eliminated by removing all opening and sliding floor planks. This trick was especially used during the sea scenes, for which a special device and several machines, preserved up to the present, were used. They consist basically of a shaft with a handle and a crossed bars equipped on the end with small wheels. When this shaft was turned, the small wheels whacked an illusively painted canvas placed above the machine, onstage, and the impression of a wavy ocean was very convincing. We also mustn\'t leave out the typical Baroque "flying machine", which enabled an actor\'s dramatic entrance onto the stage. Two crude seats with huge iron rings for typing ropes attest to their existence on the Krumlov stage.

The author of the theatre technology of the Krumlov castle theatre remains unknown thus far. For the dilettante son of the prince, Johann Nepomuk zu Schwarzenberg, it would have been too specialized a task, and the carpenter Laurentin Makh is accredited rather with the execution of the craft work.

As for original sound effect machines, two thunder-makers were preserved in the Krumlov theatre. One of them is a simple four-sided drum with a double mallet for drumrolls, and the other is a narrow wooden shaft on the left side of the stage portal, in which thunder was created by rolling stones down the shaft, banging on the wooden walls as they tumble. The sound of falling rain was achieved by the "drizzle", 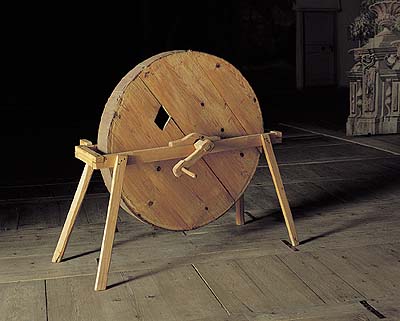 essentially a circular wooden drum filled with sand, rotated above the stage on the left gallery. As for other preserved scenic props from the original theatre, we can name a mobile shopkeeper\'s stall, the back side of which is decorated with painted shelves with assorted goods, then a miniature sutler\'s cart, a fountain, and stands of cypress trees, lemon trees, orange trees, and grapevines, all with transparent fruits, illuminated from behind. 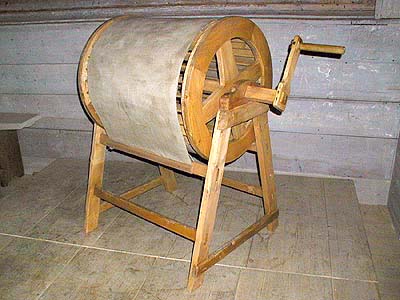