Theatre activity, in practice, implies the compilation of theatre librettos, texts, scenery and costume designs, and mostly musical material. The musical collection of the Krumlov Castle, composed of several thousand sheets, makes up this theatre repertoire with hundreds of works. Among these authors we can find names for example like Christoph Willibald Gluck, Antoine Dauvergne, André Francois Philidor, Johann Adolph Hasse, Domenico Fischietti, Niccolo Piccinni, Giuseppe Scarlatti, Antonio Sacchini, Tomaso Traetta, Florian Leopold Gassmann, Giovanni Paisiello, Antonio Salieri, Vojtěch Jírovec and others. The fact is, however, that with one exception, of these authors not one opera was performed on the Krumlov stage.

No archival documentation exists about a high level of theatrical activity in the castle theatre shortly or even later after its construction. It seems to have been always a case of exceptional performances. To make the claim that drama companies traveled to Krumlov in order to entertain the castle residents would be also far from the truth. In the first years of the theatre only members of the royal family played here, occassionally their relatives or friends. Sometimes some of the prince\'s staff might participate in a performance or two. 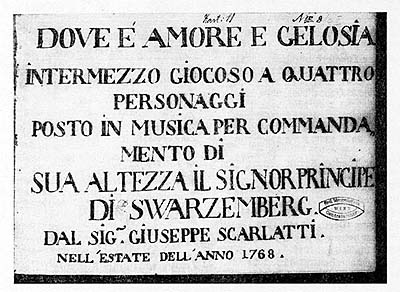 The most significant theatrical undertaking in the castle theatre in the 18th century was undoubtedly the ceremonial performance accompanying the celebrations of the wedding of the prince\'s son, Johann Nepomuk zu Schwarzenberg on July 24, 1768. It also happened to be the first performance in the theatre after its construction. On the program was the comic

opera named Dove e\' amore, e\' gelosia (Where there is love, there is jealousy) by the Italian composer Giuseppe Scarlatte (1712-1777), the singing teacher of the prince\'s daughters. The performers in this case were family members and friends. The sheet music has been preserved in its entirety in the musical collection of the State District Archive of Třeboň - Český Krumlov Branch. During the summer of 1768, an undetermined French-German comedy with pantomime was performed in the castle theatre. Research into archival sources done so far, however, little confirms the (evidently) rich theatre life of the castle Baroque Theatre in the 18th century. One would predict, from the unbelievable breadth of preserved theatre inventory, that the theatre life in the 18th century would have been correspondingly rich and active. Paradoxically enough, however, research so far carried out in the archival sources little confirms this expectation.