The mighty bastions standing near the entrance to the IInd courtyard create a part of the fortifications built in 1620. At the beginning of the outbreak of the Thirty Years\' War the imperial garrison adjutant Ferdinand Carrati de Carrara had the castle fortified. On the tops of the bastions the figures of lions bear the coats-of-arms of Prince Joseph Adam zu Schwarzenberg (1722-1782) on the left and his wife Marie Terezie von Lichtenstein (1721-1753) on the right.

The stone bridge over the deep moat replaced the original wooden draw-bridge in 1647. In the middle of the 18th century the sculptures of Virgin Mary and St. Joseph were erected on the side walls. Bears are kept in the Bear Moat at Český Krumlov Castle as living proof of a presumed relation between the Lords of Rosenberg and Italian family of Orsini. The coats-of -arms of Vilém von Rosenberg (1535-1592), Johann Anton I. von Eggenberg (1610-1649) and his wife Marie Anna von Brandenburg (1609-1680) are located above the scuncheon lining the gate. 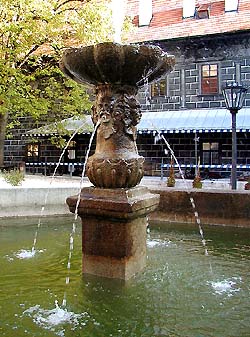 The present-day IInd courtyard covering the grounds of the original so-called Lower Castle consists of the Little Castle with a tower, New Burgrave\'s House, Mint and Dairy. The courtyard\'s terrain was given today\'s appearance around the year 1640, while in the Middle Ages the courtyard consisted of few buildings creating a fortification between the Lower and Upper Castle. It was not until the second half of the 16th century that the area was enclosed by new buildings during far-reaching reconstructions carried out to convert the Krumlov castle into an imposing castle residence.

The oldest and most important building is the so-called Little Castle with a castle tower (see Castle No. 59 - Little Castle, Castle No. 59 - Castle Tower). In the left-hand corner of the courtyard there is a staircase leading to this building which was mentioned as early as the first half of the 13th century as a mighty cylindrical tower with a palace. At the time of the rule of Vilém von Rosenberg around the year 1580, the comprehenxsive re-building of the early Gothic Little Castle was carried out by architect Baldassare Maggi d\'Arogno and the austere Gothic palace was converted into the residential house built in Renaissance style. The tower was remodelled and the arcade gallery was established on the top. In 1591, the painter Bartoloměj Beránek - Jelínek decorated the castle tower with paintings using figural and architectural motifs. After the document case was opened on August 22, 1991 the dates of building stages in 1690, 1794 and 1947 were made accurate thanks to the discovered documents. Current restoration and reconstruction activities aspire to rehabilitate the Renaissance architectonic features of the tower and Little Castle that are partly visible or covered with plaster from the 19th century. 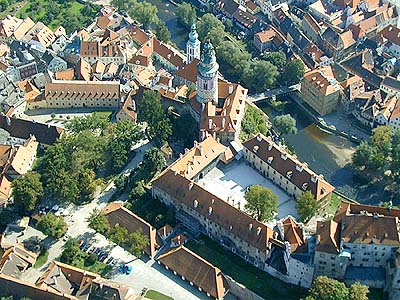 The above mentioned building activities carried out by Baldassare Maggi d\'Arogno included the construction of the so-called New Burgrave\'s House (Castle No. 59 - New Burgrave\'s House) around the year 1578 which enclosed the IInd courtyard from the northern and eastern side. The two-wing building of a rectangular disposition was erected above the cellars with mighty vaulting (48 m in length, 4.6 m in height, 8.5 m in width). Such cellar premises are, apart from the Prague Castle, unparalleled among Czech castle architecture. The cellars with the access to Rejdiště (Romp Ground) originally accommodated stables. Another section of smaller cellars serving as a jail from 1803 were situated next to the place where bears are kept. The ground and first floors of the building were originally used for castle administration. At the present, the premises above the passage accommodate the castle library housing about 40 000 volumes of classic and scientific literature gathered over the course of the last four centuries. One of the first vocational schools of agriculture in Bohemia was established in the larger northern wing in the years 1800 - 1850. At the present time there are offices and depositories of the branch of the State District Archive housing a vast number of documents dated from the second half of the 13th century up to the present. The barracks of the princely Grenadier Schwarzenberg Guard, which served at the castle from 1742 to 1949, were located on the ground floor. Four cannons dating from 1608, 1644 and 1870 are remnants of the guard\'s operation. Chiaroscuro facade paintings, originally in Renaissance style, done most probably under the supervision of Gabriel de Blonde in the second half of the 16th century were restored in the years 1842 and 1908. 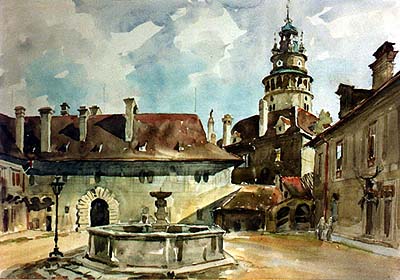 The southern side of the courtyard is encircled by one of the newest buildings, the Mint (Castle No. 59 - Mint). The re-establishment of the mint is mentioned in connection with the building activities carried out in the rule of Prince Johann Anton I. von Eggenberg (1610 - 1649) in 1642. However, the reliable evidence of the mint\'s localisation doesn\'t date until the 1680\'s. After a great fire in 1729 the building was reconstructed according to plans by A. E. Martinelli and one storey was added to acquire its present-day appearance. The stucco decoration located above the central entrance implies the purpose the building used to serve - apart from (Coinage) the house was a flat of the princely huntsman, later the estate offices, forest headquarters etc.. Nowadays the ground-floor premises are available to the castle administration while the cellars house the depository of the State District Archive. The first floor accommodates exhibitions (Tourist Service within the Český Krumlov Castle Complex).

The Fountain in the IInd Courtyard of Český Krumlov Castle is dated from 1641 and its construction evidently took place in the context of a modification of the courtyard\'s terrain. Entrance to the Upper Castle was made difficult by a second moat, but this was solved in the Gothic period by a tower with a staircase which was connected to the palace by a wooden bridge leading up to the first floor. The core of this Gothic tower was what is today known as the Dairy (see Castle No. 59 - Dairy), which after a Renaissance reconstruction served for the production of butter and processing dairy products for use in the castle kitchens. The contemporary facade of the building was repaired in 1989. In 1575 access to the Upper Castle was expanded to its present situation (see Corridor Connecting IInd and IIIrd Courtyards of Český Krumlov Castle), while the drawbridge was disassembled in the middle 17th century.