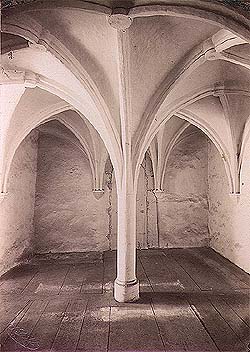 The castle which bore the name of Krumlov was probably founded in the middle of the 13th century on the sheer rock cliffs rising above the meandering Vltava riverbed. It was built by the Lords of Krumlov who belonged to the powerful Bohemian noble family of the Witigonen. The name of the castle originated from the old German word Crumbenowe which describes the configuration of the landscape, namely the place on the rugged meadow or lean. The original Gothic castle consisted only of the Little Castle with a tower which dominated the whole area after the later completion of several mediaeval and Renaissance remodellings.

In 1302, the family of Lords of Krumlov died out and the relatives Rosenbergs. took over the castle. One of the most powerful Bohemian noble families, bearing a five-petalled rose in a silver field as their coat-of-arms, chose Krumlov as their main and permanent family residence. Under the rule of Jindřich von Rosenberg (1262-1310) and his son Petr I. von Rosenberg (died in 1347) the Little Castle below the tower was enlarged (Castle No. 59 - Little Castle). It was at this time when construction began of the Upper Castle (Castle No. 59 - Upper Castle), which consisted of two palaces and two mighty square towers. The castle, in addition to its defensive and residential role, assumed the role of the major administrative centre of the vast Krumlov dominion. Petr I. von Rosenberg, who occupied the important posts of the highest chamberlain and provincial official in Bohemia, made an effort to make Český Krumlov the South Bohemian parallel of the royal Prague metropolis. The new chapel of St. George and St. Catherine, which was consecrated at the end of the year 1334 and favoured with indulgences for its pious visitors, was built inside the premises of the castle on the request of Petr\'s wife Catherine von Vartenberg. 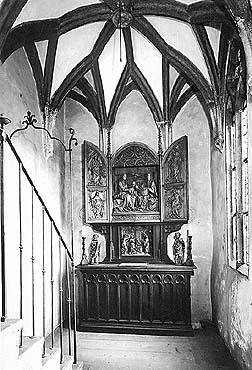 Far-reaching reconstructions still in Gothic style were carried out under the rule of Oldřich II. von Rosenberg in the middle of the 15th century, and the area of what is today the IV. courtyard was built up. The Krumlov castle was extended and special attention was paid to its striking power. Oldřich II. von Rosenberg (1403-1462), a vibrant and dominant ruler, was the leading figure in the events of the Bohemian Kingdom during the 15th century and represented the mainstay of the Catholic estate during and after the Hussite wars. It was during the rule of Petr IV. von Rosenberg (1462-1523) that the importance and prior position of the Rosenbergs was confirmed in writing by laying stress on the priority of the Rosenbergs among the Bohemian nobility inside the Vladislav provincial system as documented from the year 1500.

Petr IV. von Rosenberg converted his Krumlov castle into a suitable representative seat with a residential area around the IIIrd and IVth courtyards (IIIrd Courtyard of Český Krumlov Castle, IVth Courtyard of Český Krumlov Castle). The suprising last will and testament of Petr IV., in which he left his property to Lord Zdeněk Lev of Rožmitál and other Bohemian lords, reflected the disputes with his nephews Jan III. (1484-1532), Jošt III. (1488-1539), Petr V. (1489-1545) and Jindřich VII. (1496-1526). The struggle to save the Rosenberg dominion began and eventually exhausted the family\'s financial resources for which Jošt III. and Petr V. had to fight for up to the 1530\'s and 1540\'s.