The State Castle of Český Krumlov, with its architectural standard, cultural tradition, and expanse, ranks among the most important historic sights in the central European region. Building development from the 14th to 19th centuries is well-preserved in the original groundplan layout, material structure, interior installation and architectural detail.

A worthy assessment of the area by both domestic and foreign experts resulted in the acquisition of historic monument preservation status. In 1963, the town was declared a Municipal Preserve, in 1989 the castle became a National Monument, and in 1992 the entire complex was included onto the list of UNESCO World Cultural Heritage Monuments.

The Administration of Český Krumlov Castle as a functionary of the Heritage Authority in České Budějovice attends to the operation of the structures, especially castle tours, maintenance, construction, and restoration work, and also participates in the arrangement of Cultural and Social Activities at Český Krumlov Castle. 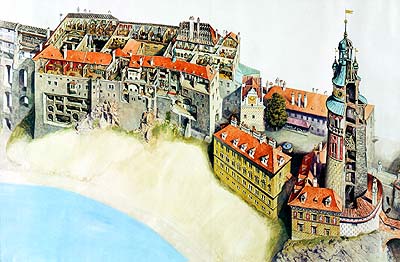 Location :
The mighty complex of the castle is erected on the rock promontory which has been sculpted by the Vltava river from the southern side and by Polečnice stream from the northern side. The castle towers proudly above the refined Renaissance and Baroque burgher architecture of the town below. The town, together with the magnificent Church of St.Vitus and the complex of the castle, creates an unique feature of the whole region. Like a precious pearl, the town of Český Krumlov is situated in the valley surrounded with the massif of Blansko Forest to the north and the undulating foothills of Šumava to the south and west.

Area :
The castle area is one of the largest in central Europe. It is a complex of forty buildings and palaces, situated around five castle courts and a castle park spanning an area of seven hectares. The groundplan layout of Český Krumlov Castle shows the area and location of each court and building. 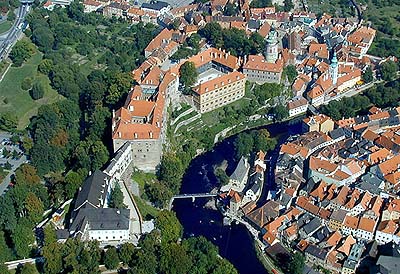 Name Origin :
The name of the castle Krumlov originated from Latin expression castrum Crumnau or ancient German Crumbenowe. It reflects the configuration of the landscape - krumben ouwe means the place on the rugged meadow. The Český Krumlov Castle was mentioned for the first time by an Austrian knight minnesinger Ulrich of Lichtenstein in his poem "Der Frauendienst" which dates back between the years 1240 and 1242.

The first written form of the name of Crumbenowe is included in a document of Austrian and Styrian Duke Otakar from 1253. At that time, Krumlov was the seat of Vítek of Krumlov who belonged to the powerful noble family of Witigonen. The expression "Český" has been used in connection with Krumlov since the middle of the 15th century.