Location and description :
The Baroque castle gardens founded in the 17th century creates an integral, in fact the largest, part of the entire castle complex. It is situated on the rise and slope adjacent to the complex of castle buildings around the Vth Courtyard of Český Krumlov Castle from the southwestern side.

Original name :
The earliest known name of the park was the New Garden ( in German original Neue Garten ) contrary to the older Renaissance garden in Nové město. Later it had its name of New Princely Garden, then French name of Jardin du Prince de Schwarzenberg, the German name having no Czech equivalent Lust- und Ziergarten, Court Garden (in German Hofgarten).

Description of the object :
The park stretches over a rectangular area of about 150 x 750 metres. The total area is of 10.875 hectares. The orientation of the direct axis is to the northeast and southwest.The park is surrounded by a wall.

Two narrow terraces situated on the northeast side of the gardens turn on the facade of the Renaissance House (see Castle No. 177 - Renaissance House). The lowest place in the park is at an altitude of 492 metres. The terrain then rises inside the park in a southwesterly direction through the terraces, the lower parterre and upper park towards the far end of the park at an altitude of 552 metres. The back park wall gradually passes into open country. In the past the park was accessible by several gates as well as by a wooden corridor leading from the Renaissance House. The Connecting Corridor enabled access from the castle. The castle park consists of the following parts : 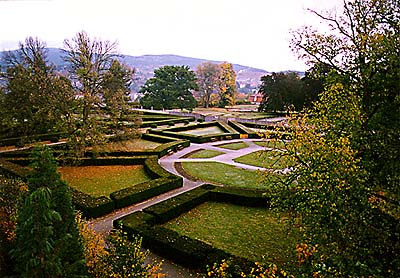 Present use :
At the present the park is accessible : 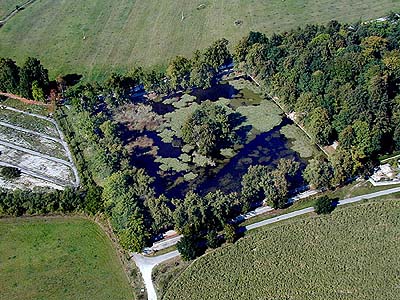