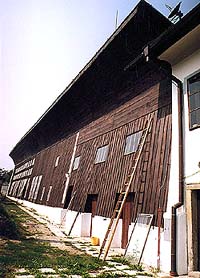 Location :
This structure sits on the top of the hill, lying at the west of the building on the Vth Courtyard of Český Krumlov Castle. It forms a part of the supply gardens (former kitchen garden Na plášti), placed in its northwest corner.

Description :
The spacious, approximately oblong-shaped lies with its longer side adjacent to the path connecting the castle with the present main entrance to the castle gardens at the crossing of the two streets, K zámecké zahradě and Důlní.

The house contains three separate parts: the western ground-floor (orangerie), central one-storey (castle gardener\'s house) - both having the same construction depth as well as a fragment of a lower part of the greenhouse building on the east.

The orangery is a two-winged building with a desk roof. The northern brick wing opens via windows to the street, and is accessible by three separate entrances with stone wainscotings. The facade is smooth, and the window apertures are framed with painted ribbonwork. The southern wing of the orangery has wooden framework construction, while the main part of the southern facades is glazed the smaller part and the bulky cavetto ledge being covered by planks.

The castle gardener\'s house is a one-floor brick building with a hipped roof covered with shingles. There are two entrances in the house, one from the side of the street and the other from the interior of the supply gardens - both have a stone walling with painted ribbonwork. The facade is smooth with three window axles on the northern, eastern and southern sides, while the western wall is blind, neighbouring with the orangery. 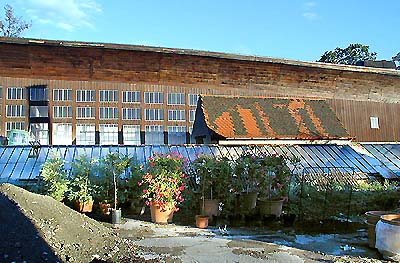 Historical development of the construction :
The core of the structures originated perhaps in the first half of the 18th century. In 1752 an ample two-room greenhouse was built - an orangery almost 59 meters long and 7.5 meters wide, containing a room for rapid growth ( Triebhaus )and the pineapple room. Between these two operational parts a small one-storey structure with a saddle roof was built for the gardener through which penetrated the desk roof of the orangery. From the original equipment, what remains up to today are the original ceiling beams in its northern tract. It seems that in the same period a structure was built which extended the long brick-walled ground floor for garden personnel. The structure underwent several reconstructions in the next period - the former pineapple house was modified in the beginning of the 19th century for the cultivation of flowers and grapevines, and sometime before 1819 the home of the gardener was raised a floor higher. In the same period, the southern tract of this building was adapted for residential use, even though its original function was that of production, as a part of the orangery. In 1844 the orangery was equipped with new heating pipes, covered with cast-iron plates, and the old greenhouse was reconstructed. The architectural condition of the building began to gradually suffer after 1850, and hand-written notes of a plan from 1879 shows a proposal to demolish a large part of the orangery, which was actually realized some time later. 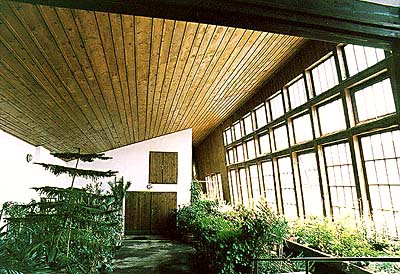 The process of dilapidation of building no. 61 was finally halted during extensive reconstruction work carried out between 1987-1992.

Contemporary use :
The structure is presently used as a residence as well as for operational support for castle gardening activities.