Foundation of the Castle Baroque Gardens

The castle garden was founded under the reign of the last Eggenberg prince of Český Krumlov, Johann Christian I. von Eggenberg. Prince Johann Christian, after his marriage to Marie Ernestine von Eggenberg in 1666 undertook an extensive reconstruction of the former Rosenberg castle into a confortable aristocratic seat which reflected the spirit of the ages, an inseparable part of which was the baroque gardens. The first object of the newlyweds\' attention was the lower new-town gardens. The castle gardens proper were finally founded at the end of the 1670\'s. 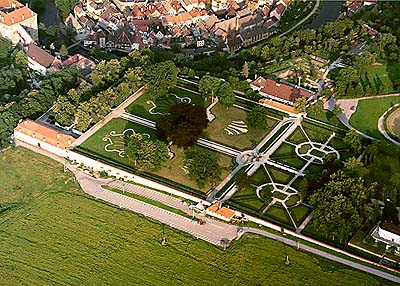 From 1678 to 1683 the uneven terrain on the hill above the castle was levelled into terraces, walls were built around the periphery of the garden, and a castle lake was dug. An interesting point is that part of the property had to be bought by the prince from the local bourgeois. The garden was established in a roughly rectangular shape. The project of the castle arrangement didn\'t survive, so for the purposes of reconstruction of the original shape of of the garden archival sources from soon after the garden\'s establishment were used.

The main compositional axis of the garden passed through the center of the garden like a spine and divided it into two symmetrical parts which were divided further by paths into square areas about 60 by 60 meters. This method of garden composition was stylistically still a renaissance, respectively manneristic, interpretation of architectonic usage of space, in that the whole is created by placing individual parts behind each other according to some geometric schemata without a more elaborate compositional union of these elements into an organic whole. Through the means of more advanced baroque compositional elements, the garden is composed of both high hornbeamed lanes along the side paths to raise the axial of the garden disposition as well as brodery parterres and accentuation of the transverse axis of the garden on the open landscape through the windows located in the garden walls.

In order to place the Krumlov gardens into a larger context, it must be realized that in the same age, the age of classical modification was arising in Versailles. The conservative choice of a somewhat outdated compositional schemata makes clear a certain retardation of the Czech lands behind the cultural centres of the Europe of the day, where garden fashion was being dictated by the tastes of France\'s Louis XIV.

The composition of the Krumlov gardens indicates that its composer was familiar with the early baroque gardens in Germany (court garden at the Wittelsbach residence in Munich, garden at the the residence of the Würtenberg Dukes in Ludwigsburg castle), as well as with the flower garden of the Olomouc Archbishop in Kroměříž. 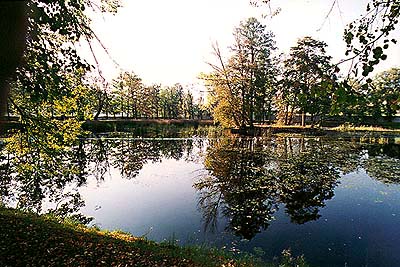 The complex configuration of the terrain between the Renaissance house (castle No. 177 - Renaissance house), respectively the entire set of buildings, on one side and the hillside on which the castle gardens were later formed on the other, the usual method of the day - establishing the garden immediately adjacent to the castle - was impossible. The solution which the creators chose was logical and even unique in Czech lands to this day. They connected the main suites in the castle with the lower terrace of the castle gardens with the help of a Connecting Corridor resting on wooden pillars at the beginning and stone walls at the end. The missing main element of garden composition - ending the compositional axis of the garden with the center facade of the castle - was replaced by inserting water motives at the beginning and end of the axis. The axis began with an eight-sided fountain in the center of the lowere parterre and ended at the castle pond in an island, in the middle of which was placed a basin with a fountain. Roughly in the center of the garden, the main lengthwise axis of the garden crosses the main architectonic axis, leaving the center of the southeast facade of the summerhouse and continuing out the gate in the outer wall of the garden. 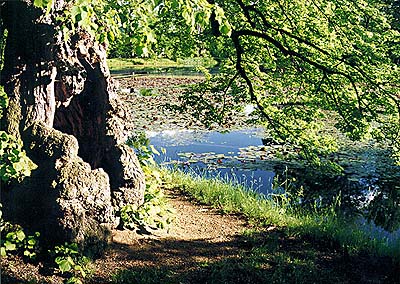 The summerhouse was built from 1690 - 1692, later called Summerhouse Bellarie. Even though the building was placed outside of the main axis of the garden, it dominated the garden with its overall composition, on one hand by its position on the raised terrace and on the second by its sheer height and mass. From the steps of the summerhouse, a magnificent view opened up onto the lower-placed flat brodery parterres with the complex ornamental hedge arrangement, the fountains, and the shapes of the trees. The scenery was closed off with high hedged lanes bordering the side paths which led along the outer walls of the garden. 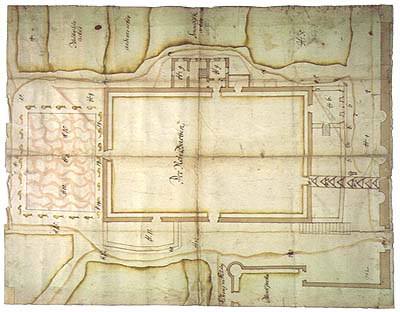 The oldest iconographic source for us is the plan of the so-called New Gardens, originating from around 1702. This very unartistic schematic method captures the garden in union with the facade of the Renaissance house. The garden is bordered by surrounding walls, while the castle pond was located still outside the designated area of the garden. The plan documents the existence of the terraces, today\'s main gate in the southeastern wall of the garden and the then unfinished gates next to the garden-keepers home, as well as documenting the wooden corridor between the Renaissance house and the summer riding school. Details of the internal arrangement of the garden\'s actual areas are not revealed by the plan. In contrast, the plan includes detailed, albeit quite inaccurate, measurements of the garden-keeper\'s home (Castle No. 62 - Tavern Markéta), the entrance gate to the garden and the northern part of today\'s supply gardens (listed under the name Mantelgarten). Especially interesting on the plan is a building which is still unkown to us today, but stands on the site of today\'s winter riding school (Castle No. 178 - Castle Riding School).

Another plan (again from around 1702) documents the existence of a particular part of the garden, termed "royal", enclosed by walls and connected to the southeastern surrounding wall of the castle gardens. This area was accessible only from the area of the castle gardens proper. 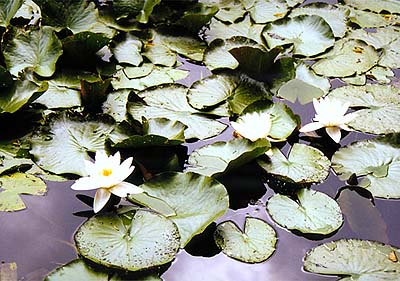