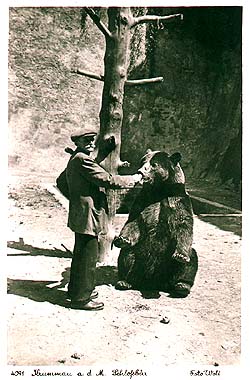 In many places, the Český Krumlov Castle is decorated with ostentatious coats-of-arms of the lords of Rosenberg bearing the sign of the five-petalled rose in a silver field and bears as the shield-bearers. The Rosenberg family legend held that the Rosenbergs were related to the noble Italian family of Orsini. "Orsa" means she-bear in Italian, and it is this animal motif which especially the last Rosenberg rulers used to demonstrate their relationship with the house of Orsini. They used the motif in their coat-of-arms, in which two bears are shown as shield-bearers. This alleged relationship was to support the antiquity of the house of Rosenberg, leading its roots to as early as ancient Rome.

The first notes of bearkeeping at the Český Krumlov Castle date from the time of Wilhelm von Rosenberg, in the latter half of the 16th century. Just where the bears were kept in the castle at that time, however, is not known. It could not have been in the present bear moat (see Ist Courtyard of Český Krumlov Castle) , as this was established only at the beginning of the Thirty Years War at the beginning of the 17th century. The first records about bears being kept in the moat date from 1707, when four bears were held there. From the 1730´s to the 1790´s bears were kept in the moat continuously, though in the first half of the 19th century there was no animal to be found there. It was not until 1857 that Karl zu Schwarzenberg of the Orlík family line acquired a pair of bears from Transylvania for Johann Adolf II. zu Schwarzenberg. The task of looking after the animals was given to Jan Jindra with the title of "bearkeeper", who held this post for the full 30 years. Besides bears being born at Český Krumlov Castle, the number of bears was maintained by purchasing animals from zoological gardens and by donations from well-known aristocrats. From 1887 the moat remained uninhabited for 20 years. In 1907 the prince Sigmund Schonburg-Waldenburg gave the Schwarzenbergs a gift of two she-bears called Ruschi and Ajax, brought from the preserve of Kynžvart. The first bear lived until 1930, the other until 1935. 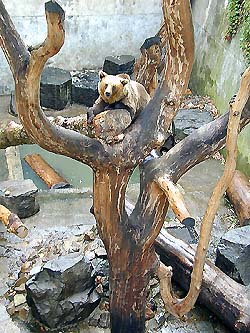 At present there are four bears kept in the moat - the older Vok and Kateřina, and their two cubs Daxi and Hubert, which are taken care of by the present bearkeeper Jan Černý. The present conditions in which the bears live, however, are far from ideal by modern standards. The administration of Český Krumlov castle, in cooperation with the Foundation of the Baroque Theatre, are attempting to carry out a renovation of the ursinarium and improve the living conditions of the bears. Contemporarily a renewal study for the Ursinarium in Český Krumlov Castle has been drawn up. Its realisation will be a demanding task, and assistance with its solution and execution is welcomed by the castle administration.

In spite of all difficulties, the bears are given plenty of attention, especially on the part of the bear-tender Jan Černý, who is the originator of the regular Bear Festival at Český Krumlov Castle held on the occasion of the bears´ birthdays and at Christmas. These bear festivals have been enjoying a great interest both of the general public and the media for years. 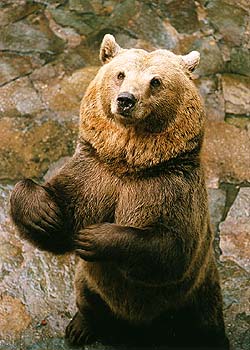