As early as the middle of the 14th century at the Rosenberg Court in Český Krumlov there was an office whose major task was to write documents and later to take care of the general office agenda. The originals of important Imperial Charters and Privileges, which guaranteed the possessions of the Rosenbergs and their privileged rank at the kingdom, were stored in chests located in the St. George and St. Catherine Chapels sacristies of the Castle. To protect them against any damage, greaseproof paper copies were made up which were named "Rožmberský kodex marientálský" (the Mariental Codex of Rosenbergs) after their place of storage. This codex contained around 100 documents dated from 1260 until 1364, which were prepared under the authority of the Rosenbergs.

The groundwork of the later Rosenberg Archives was formed in the year 1418, when documents from other places were collected from around Český Krumlov to be protected here against the Hussite troops. The registry and office notes on the back of documents made by Ulrich II. von Rosenberg. also declare that in the middle of the 15th century an Archives office had its place at the Rosenberg Court. The subsequent Rosenberg Chancellor Václav z Rovného also worked with documents and around 1469 made up a collection of Czech and Latin document forms as per originals. Large folios declaring the debts of Oldřich von Rosenberg are preserved from that time as well.

Nevertheless, the real organizational work in the Rosenberg Archives started in the first half of the 16th century by the Chancellor Václav Albín z Helfenburka. As an excellent lawyer and specialist of Rosenberg documents, he had the best preconditions for the task. He focused his research only to the legal documents found in the Castle Chapel sacristy, while correspondence and other booklet material was left out of his interest. After 1550, when the Archives were entrusted to him, he organized the documentation according to subject and the external form into 25 sections, each of them containing several cartons. The sections were marked with the capital letters of alphabetic system and with serial Arabic numbers. Albín used various marking in some cases. The same sign of a section consecutively appeared even on the document from that respective group and on the registry in the inventory which the Rosenberg Chancellor made out himself. The beginning of documenting the administrative and economic literature is connected with a new main bookkeeping establishment - the "Buchhalterie" (Castle No. 59 - New Burgrave´s House) in 1578.

A final arrangement of the Rosenberg Archives was credited to Václav Březan. He was hired as an archivist on the 22nd of November 1596 and in a short while succeeded to set all documents which he found in the Castle Chapel sacristy in order. At first he put together an inventory of the most important documents, Imperial Charters and dynasty Privileges, and marked them with a registry. His next task was to classify all documents into twelve classes as per the relevant content. Each class was stored in one or more boxes. Březan succeeded in finishing the arrangement of the first three classes and made up the contents of them by 1598. Until now it includes also documents which were later irretrievably lost. The entire Archives work was completed in approximately 1601. When in 1602 Petr Wok von Rosenberg left Český Krumlov, the Rosenberg Archives, placed in 23 chests, was moved to Třeboň along with him. The Archives location in Třeboň was in the iron doors boxroom at the Castle\'s northern wing, in front of the library house. After the last Rosenberg death, the family Archives went to the hands of the Švamberks, the Rosenberg successors who were to keep it as a memory of the Rosenberg dynasty. After 1618 Třeboň property changed ownership a few times and in 1660 became part of the Schwarzenberg helodings. The Rosenberg family Archives was moved to the area under the castle\'s long corridor porches in Třeboň and created the Schwarzenberg Archives component. These days it is still a part of the collection of "Foreign dynasties".

After Peter Wok\'s departure from Český Krumlov, only documents related to the estate operation were left. As they were not stored at the St. George Chapel sacristy, the exact place of their preservation is unknown even today. Based on the Castle inventories of 1605 and 1608, we only know that some documents were kept at the "Buchhalterie" in the bookcases, chests and shelves or were arranged into partly numbered packages.

The same situation probably remained during the reign of the first Eggenbergs. Their family Archives were placed in Štýrský Hradec, and not until the year 1665 did Johann Christian I. von Eggenberg establish the Court office in Český Krumlov. At that time the Archives already existed at the Castle. The prince had the important documents sent there concerning the dynasty\'s Czech affairs. Jan Arnošt Hammermiller, as the first registrant, was employed in 1671 as Court office clerk, and his task was to take care of the old estate Archives. At the end of the 17th century Ambrož Augustin Haláček became the registrant\'s adjunct and made up a list of the Eggenberg Archives. Basically it was a list of documents with a registry, divided into 15 sections, but it was left unfinished. After the death of Johann Christian, his wife Marie Ernestine von Eggenberg, née zu Schwarzenberg, acquired Český Krumlov. Haláček transferred to her services and was forced to give a significant amount of the Archives materials to Jan Seyfried, a brother of the dead prince. For this reason only documents with blank voids were stored in Český Krumlov as well as those which particularly related to the possession in Bohemia and to the Eggenberg Court of that time.

The family Archives of the Schwarzenbergs, who inherited Český Krumlov after the year 1711, was located at their main dynasty residence in Schwarzenberg until 1653 when Johann Adolf I. zu Schwarzenberg ordered its transfer to Vienna. Nevertheless a small part of the documentation was left in its place. As per the last will and testament of prince Fernand zu Schwarzenberg in 1703, the central archives should have been kept forever in Vienna, being the imperial residency. Only documents directly related to the operation of the estate were stored in Český Krumlov. The decision was made in 1723 to make a list of the Český Krumlov Archives. The task was given to Ambrož Haláček, who entered the Schwarzenberg services. He divided the material into 19 sections, spread further into columns. Similar contents for the archives were formed simultaneously in Vienna and Třeboň as well.

In 1728 the former Eggenberg building of the Mint burned down, and in the following years, a new building was built on its place. In the basement were six rooms in total reserved for the documents, which had been mostly stored in the bookkeeping area until that time. The Archives material is still kept today in the same place (Castle No. 59 - Mint). Efforts to concentrate the Archives material even continued in the year 1747, when the Český Krumlov "hejtman" (a district administrator) distributed a flyer to respective estates with a request to sent all important documents over to the Castle Archives. Authorized copies of those documents were to have been made at the Castle. The Archives increased after 1785, when part of the rich archives of the Monastery in Zlatá Koruna was added while it was dissolved and acquired by the Schwarzenbergs.

A substantial reorganization of the Schwarzenberg Archives was carried out at the end of the 18th century. In 1793 a new filed Archives system was stated by the prince Joseph, Martin Forch being its author. Each document was filed as per the concerned object, and at the same time the fundamental difference between an archive in the strict sense of the word and a register was determined. Those documents with legal importance, maps and plans were just stored in the Archives department. The other documents were filed at the register. The system dictated the exact way how to maintain and file the Archives material. That "systematization of Archives" was completed in Český Krumlov under the direction of Karel Jakub Battista approximately in 1803. The Archives became only the Schwarzenberg dynasty\'s private institution when in 1848 the bondage and "patrimonial" justice had been abolished. The state administration documents hand over was delayed until the year 1850.

An important turning point at the Český Krumlov Archives development was the year 1892, when the decision was made to demolish the Schwarzenberg palace on Neumarkt in Vienna, the central archives location, and to move it to Český Krumlov. The Český Krumlov Archives finished its existence as merely an estate Archives and became, along with the Castle Library in Český Krumlov , a part of the central Schwarzenberg Archives. Even the employees of the Vienna archives moved to Český Krumlov. Hynek Gross, the later long-standing Český Krumlov archivist, was not missing among them. The central Archives expenses were covered by the Český Krumlov estate as well as by all Schwarzenberg estates. All new documents were stored at the basement area of the Upper Castle IInd Courtyard on the southern part and in the Renaissance hall of the same courtyard. The Castle cellar\'s rooms of the Upper Castle Ist Courtyard were used as well. The music collection and antique collection was passed over to the Archives administration. The Castle Library moved from the Mirror hall of the Upper Castle\'s first floor to the second floor on the southern part of the building in the beginning of the 20th century. At the same time its new arrangement started following the example of the Vienna Court library with Dr. Karel Tannich in charge. The archives of the Austrian estate were also transferred to Český Krumlov during World War I. 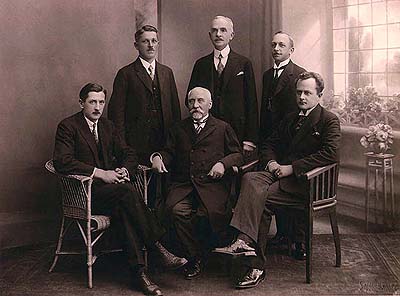 After the War, agrarian reform was carried out and the Archives were handed over to the state administration. After long negotiations extending as long as 1936, the Schwarzenbergs managed an agreement that all Archives, to retain the entirety, would remain in their dynasty\'s hands. The state committed itself to supporting the Třeboň archives by covering 40% of the expenditures. The funds of the central and main offices and "patrimonial" archives of Ratibořské Hory, Krumlov, Praha (Prague), Prachatice and Dlouhá Ves stayed in Český Krumlov after the complete reorganization. The entire Archives was moved to the area of the IInd Castle Courtyard, where is located today. In the days of the German Protectorate some funds, upon Dr. Tannich´s recommendation, were transferred from Třeboň to Český Krumlov, included the former Rosenberg Archives. When the war was over and the Rosenberg Archives returned to Třeboň, the Archives in Český Krumlov and in Třeboň were then subordinated to the Schwarzenberg Possession National Administration. From the year 1947 they were called the Land´s and from 1949 the State Institutions. In 1951 they were renamed the State District Archives of Agriculture and in the year 1952 the Forest-agrarian Archives. The last change was made on the 1st of January 1956, when the Archives were assigned to the administration of the Ministry of the Interior. The Český Krumlov Archives are now a part of the State District Archives Třeboň, Branch Český Krumlov.