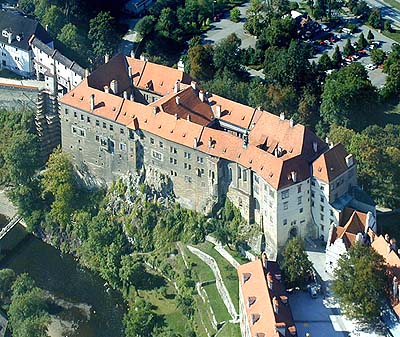 Description of the building :
The actual building has two floors, the West part of which is raised by a third floor. It is enclosed on all sides and surrounds both inner Courtyards. The inner disposition of the buildings is very complex and varied, and it gives evidence to the complicated nature of building development from the 14th to the 19th century which was associated with the changes of owners, their social positions and fashions of the period. The whole complex of buildings has cellars beneath it, at some places at four levels. They stand on its base rock foundations. (see Study for Utilisation of Cellars in the IIIrd Courtyard of Český Krumlov Castle).

The historical building development :
The oldest reference to the Krumlov Castle comes from the poem "Der Frauendienst" by an Austrian minstrel knight Ulrich from Liechtenstein. It tells of a tournament where "all the knights meet in the Czech lands at Krumlov". In 1253 the existence of the castle is mentioned for the first time in writing in the predicate of Witigo "de Crumbenove". The Krumlov branch of the Witigonen - the Lords of Krumlov - with a green rose in their coats of arms, ceased to exist in 1302 and the Castle with all the land was passed on to another branch of the Witigonen - the Rosenbergs - who had a red rose in their coat of arms. They ruled here for the next three hundred years, and during their government much building took place. While Peter I. von Rosenberg was in power, the new Castle Chapel of St. George and St. Catherine was built and consecrated in 1334. In 1396, at the time of the Lords\' Revolt, King Václav IV was imprisoned here. According to tradition he was incarcerated in the upper cellars of the southwest part of the Castle (see Cellars in the IVth Courtyard of Český Krumlov Castle). During the reign of Ulrich II. von Rosenberg the Castle was again extended and much attention was paid to its defences. The work also continued according to Ulrich\'s original project during the reign of his sons Heinrich, Johann, and Jošt. During the reign of Peter IV, the Castle had some structural defects, and a lot of important restoration work had to be done. The famous Ulrich Pessnitzer from Burghausen supervised the work.

The second half of the 16th century was a time of radical change. The second to last ruler of the clan, Wilhelm von Rosenberg, rebuilt the Castle into a luxurious Renaissance residence. The major reconstruction, between the years 1557 and 1588, was associated with Wilhelm\'s four marriages. At that time, the new kitchen was built, and in 1560 the brewery was transferred from the Upper Castle, (it is said to be directly beneath the Maquerade Hall), to the 1st courtyard of the Castle. In 1575 the Castle Chapel was rebuilt, and in 1577 the Corridor Connecting the IInd and the IIIrd Courtyards of Český Krumlov Castle was built. The last information we have about the important reconstruction is connected with the marriage of Wilhelm to Polyxena von Rosenberg of Pernstein. In 1588 the Regent Jakub Krčín of Jelčany, in the ruler\'s name, signed an agreement with the most famous Rosenberg builder, Badassare Maggi d\'Arogno for extensive courtyards to be built, followed by their painting (Wall Paintings in the IIIrd Courtyard of Český Krumlov Castle, Wall Paintings in the IVrd Courtyard of Český Krumlov Castle).

The last ruler of the Rosenberg dominion, Peter Wok von Rosenberg, sold the Castle to the Emperor Rudolf II von Habsburg in 1601, when building work was restricted solely to maintenance of the Castle. In 1622 the Emperor Ferdinand II von Habsburg gave the Krumlov estate to his financier, Johann Ulrich von Eggenberg. During the reign of the Eggenbergs, the building work recommenced. The tower was re-sited in the IIIrd Courtyard and the Castle Gallery. was constructed. The first wooden version of the long, sheltered corridor to the Upper Garden, standing on pillars, began in 1706. Johann Christian von Eggenberg\'s widow, Marie Ernestine von Eggenberg, had no children and after her death in 1716, the Krumlov estate was inherited by her nephew Adam Franz zu Schwarzenberg. In the same year, another extensive building period started under the control of the court architect Pavel Ignác Bayer. His responsibility was to rebuild the rooms the Duke had chosen as his private suite. In 1741 there was an invasion during which the Castle was taken by the French. They damaged the interiors extensively and, on departure, destroyed the wooden corridor over the Cloak Bridge. The new owner, Duke Josef Adam zu Schwarzenberg, ordered the building to be raised by another floor directly above the Mirror Room. At the same time, on his orders, the Deer Room (today the Masquerade Hall) was reconstructed and painted by the artist Josef Lederer. The Duke also recommended a dancing floor to be installed. In 1749 the work was completed and a new Connecting Corridor linked it with the Castle Theatre. Nearly all the fireplaces were then also replaced by new tiled stoves. In 1750 the foreman Fortini rebuilt the Castle Chapel of St. George and added three new oratories. The rebuilding of the Golden Hall into a concert hall, today\'s Hall of Mirrors, started in 1764 and took several years. 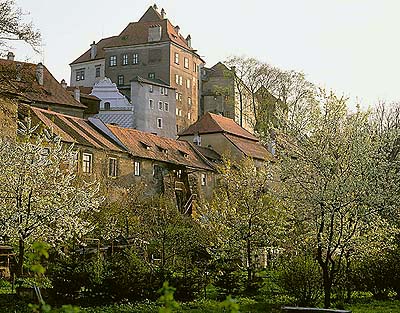 When in 1782 the Krumlov Castle ceased to be a permanent residence of the Duke Josef zu Schwarzenberg, it was reflected in the small amount of interest shown in the building and reconstruction of the Castle. Only essential repairs were carried out. In 1789 major efforts were made to preserve the damaged wall paintings; unfortunately this often meant complete repainting. In 1863 the paintings of the IIIrd and IVth Courtyards were cleaned and restored, and the frescos in the Renaissance rooms were restored in 1909.

In 1917 the army occupied the Capuchin Corridor.

Present Use :
Today the Upper Castle is open to the public (see Tourist Services within the Český Krumlov Castle Complex).