Tales of the White Lady

Perchta von Rosenberg, a beautiful daughter of Ulrich II. von Rosenberg, had a happy childhood at her father\'s castle in Český Krumlov. When she grew up she had many suitors as the daughter of a powerful nobleman. Her father married her off against her will to Jan von Lichtenstein - on one hand a powerful lord of noble rank, and on the other a violent and boorish man who had been a widower for only a short time.

A life full of slights and suffering began for distinguished, noble-hearted Perchta. In the Lichtenstein castle lived the mother and sister of his deceased wife, who harassed Perchta and took every chance to make her life miserable. They teased her and assigned her to unpleasant jobs without a friendly word. Her marriage was a hell on earth from which there was no way out. Her prayers to soften her husband\'s heart were in vain, as were her desperate letters she wrote to her brother: "Take me away from these evil people and you will merit praise as if you released a soul from Purgatory."

No one could help her, as the morals of the time wouldn\'t let a wife leave her husband even though he treated her in the worst way.

It was not until her husband\'s death that she was released from this prison. She happily returned to parental castle and became the good soul of the castle and kind-hearted patron of those who suffered. Her face indelibly mirrored the pain and suffering she had experienced, and no one ever saw her smile again. Sad, slender, prematurely faded, with curly golden hair covered by a white veil, she walked through the chambers and courtyards of the castle and watched over her brother\'s estates.

She was only 49 when she died in 1476. Her death was a terrible blow not only for the Rosenberg lords but also for the poor throughout the region. They never stopped mourning for her and soon began meeting her in their dreams. 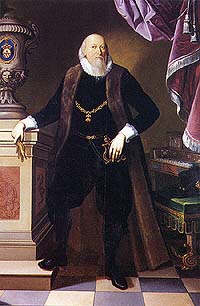 The White Lady, as they called her, used to appear at the castles in Český Krumlov, Rožmberk or other castles in the Rosenberg property, wearing a simple white dress with keys around her waist and sauntering through the corridors and chambers, prepared to face the future events. A smile on her face was a sign of good tidings whereas black gloves in her hands and a solemn countenance foreshadowed impending disaster or death.

Once, when the nurses fell asleep again, she walked up to the cradle and caressed and comforted the little Peter. There was a nurse who had recently come in service at the castle and didn\'t know the White Lady. As she woke up and saw the baby Peter in arms of a strange, unknown lady she snapped at the White Lady, "How dare you hold the little Peter? You have nothing to do with that child!"

The nurse wanted to take the baby away from her but she clasped him to her heart, replying angrily, "It\'s my right to look after this child as he belongs to my family. How dare you blame me for anything?" The she turned to the nurses woken up by the noise and rebuked them, "Why don\'t you do your duty as is right and proper? From now on take care of the child yourselves!" 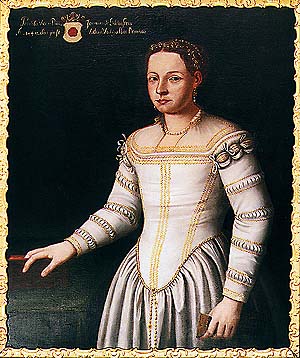 She stepped to the wet nurse and said, "Look after the baby. When he grows up tell him how much I have loved him and show him the place from which I used to come to his cradle and then leave it again."

Saying those words she bent towards the child, gave him a smile and kiss and then disappeared in the wall, turning into a light white cloudlet.

Since that time no one saw her at the castle again.

When Petr Wok grew to manhood and heard the White Lady\'s message he had the wall where she had vanished demolished. It is believed that he found a treasure in that place.