After pre-design preparation which went on for several years, the project of reconstruction was worked up by the firm Girsa AT from Prague. This firm obtained the order after succeeding in a public bidding process. The cost of the reconstruction has been estimated at roughly 13.5 million Czech Crowns. 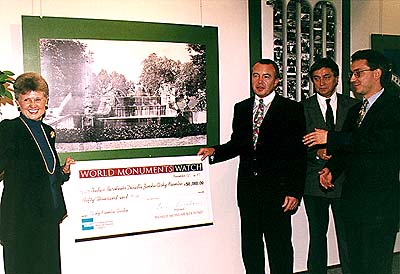 The investor for the fountain\'s restoration is State office for protection of monuments in České Budějovice, the source of the largest part of financial means being the state budget. 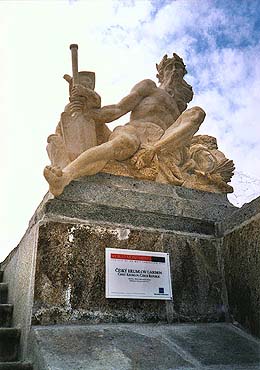 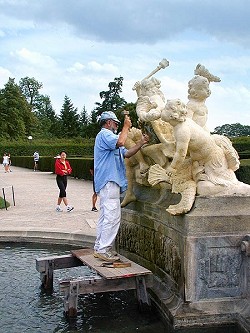 In the autumn of 1996, the actual construction work began by disassembly of the fountain and transport of the three main statues to restorers\' studios for restoration. The project calls for copies of these statues to be created through cutting into imported stone blocks which were obtained from the same quarry that the original stones came from in the 18th century. The restored originals will be publically displayed in the newly-built castle lapidarium.

During the course of the work, the Český Krumlov Cascade Fountain, on the proposal of the Baroque Theatre Foundation of the Český Krumlov Castle, was written into the List of the 100 Most Endangered World Monuments as authorized by the non-profit organization World Monuments Fund. Also included on this list were the gardens of Vienna\'s Belvedere. So these two monuments, related not only in style and period but also author, finally met again.

The Český Krumlov fountain was included again on the WMF for 1997. As a result of this inclusion, the State office for protection of monuments in České Budějovice, the investor for the fountain\'s restoration, received a sponsor check for 50,000 USD from American Express to be used towards the creation of a copy of the fountain\'s main statue. The check was presented by Mr. Colin Reeve, the general director of American Express for Central and Eastern Europe, Middle East, and Africa, and by Mr. Jerry Pribil, the general director of American Express for the Czech Republic, while the event was attended by the US Embassador to the Czech Republic Ms. Jenonne Walker.

The restoration project of the cascade fountains is to be completed in 1998. 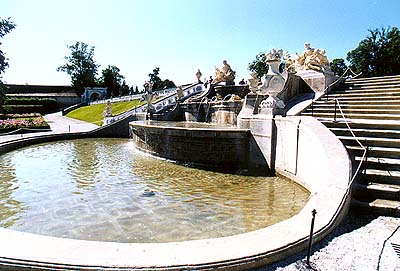