The oldest source of drinking water at the Krumlov Castle was a deep well which is located in the so-called Vaclav cellars ( Cellars in the IV. Courtyard of Český Krumlov Castle) up to the present. The first and main waterworks, constructed in the 16th century under the supervision of Jakub Krčín of Jelčany, a Rosenberg regent, were still in operation in this century. A little later, again from the 16th century, there is mention of subsequent waterworks from the forest called Dubík. In addition to the castle, that one supplied the area of a Krumlov suburb called Plešivec. Over the course of the later centuries, there were other waterworks added. A preserved description dated 1736 states six aristocratic waterworks : 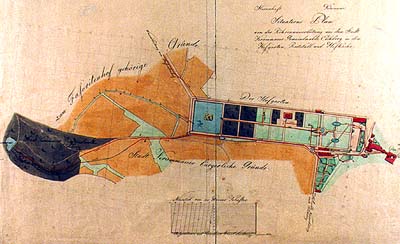 Another description of aristocratic waterworks including their length comes from the year 1756, made up by Jiří Plansker, a princely geodesist.

The last entire description of seigniorial waterworks in Český Krumlov was formed by Karel Habl, a geometrist, in 1907. It dictates them in the following numerical order : 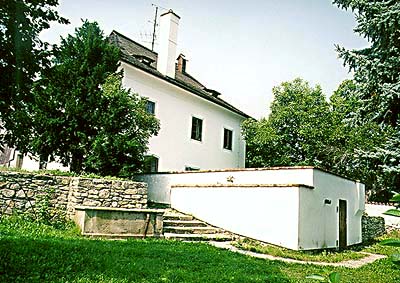 The most important waterworks of all were those from Blanský Forest, also called "the old of Krčín". Their original purpose was to supply the Castle and the brewery, and later just the Castle. Water was collected from a few springs and led by wooden pipes which were later replaced by cast-iron. Until the last century, water was led to fountains and stone troughs, from where people could draw it when necessary. At that time water distribution to flats and offices was hailed as a big achievement.

During 1923 - 1924 the waterworks took water from 12 springs of Kleť mountain. The system consisted of 4153 m of cast-iron pipes with a diameter of 80 and 50 mm, plus 1656 m of wooden tubes with the same diameters. The main waterworks branched off towards a few houses in Vyšný, Špičák and Latrán, with a total length of 1937 m. The waterworks from Kleť measured in total 7737 m. 250 people plus the entire Castle operation including the stables, diary, and others all drew from it. These waterworks were also exploited, besides by the employees of the Castle and the large estate, by people from elsewhere, who only paid a symbolic fee of 1 Koruna.

The other waterworks of the Castle complex served a large estate in that time. The brewery in Latrán, for example, had its own waterworks from the 18th century. The pond at Dubík still leads to the pond in the Castle Park today as well as supplying the Castle with water for industrial purposes.