On August 3rd, 1998, after a many-year pause in operation, the operation of the dominating feature of the Český Krumlov Castle Gardens, the Cascade Fountain, was ceremonially renewed. The investor of the fountain\'s renovation was the State office for protection of monuments in České Budějovice, while the source of the largest part of the finances was provided by the state. The renovation was also made possible by the financial support of the Baroque Theatre Foundation of the Český Krumlov Castle and the American funding organization World Monuments Fund.

The construction of the Cascade Fountain began in 1750 according to a design of the Viennesse architect Andreas Altomonte. The stonework was done from a soft calcite transported from Eggenburg in Lower Austria by the scultpor Matyáš Griessler with the help of the sculptor Jan Antonín Zinner. In 1762 a new ballustrade was built on both sides of the Cascade Fountain. On the adjacent walls along both sides of the fountain were placed twenty various decorative vases, also from Eggenburg calcite. M. Griessler built a staircase on both sides of the fountain from 1765 - 1766. He also prepared four sculptures representing the four seasons of the year along the path from the lower to upper gardens.

The fountain was repaired in 1850, and in 1925 the restoration of the vases on the ballustrade was approved, and in 1926 the Neptune statue was restored. In 1931 the original clay insolation of the fountain\'s lower basin was replaced by a layer of concrete. Other repairs were carried out at the end of the 1960\'s in conjunction with reconstruction of the Castle Gardens. In 1990 the stucco work on the ornamental decorations of the ballustrade was restored. Finally in 1996, a general overall Reconstruction of Cascade Fountain began with the intention of the renewal of the significant architectonic - sculptural complex, itself being one of the most valuable works of its kind in the Czech Republic. The work was finally recognized as officially complete on the 3rd of August, 1998.

The project of the fountain\'s reconstruction was worked up by the firm Girsa AT from Prague. 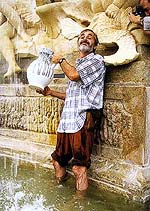 In a public bidding competition the firm Suchý from Hlinsko was chosen. The cost of the reconstruction came to roughly 16 million Czech Crowns. In the autumn of 1996, the actual construction work began. The stone construction was reconstructed, and the water and electrical network was reinstalled. Copies were created by carving the statues from stone blocks transported from the same quarry near Vienna which the original sculptures were from in the 18th century. The restored originals will be publically displayed in a newly-built castle lapidarium. The planned deadline for the completion of the restoration work was set ahead six months thanks to the skill of the firm Suchý, so the functional Cascade Fountain can be admired by visitors already in this summer season.

The ceremonial evening was attended not only by renowned personalities of the cultural and social life of the town and region of Český Krumlov such as the vice-mayor Ing. Jan Vondrouš, Regional Administrator JUDr. František Mikeš, but also the senators Karel Vachta and PhDr. Jiří Pospíšil came to admire the handiwork of craftsmen and artists. The ceremonial initiation of the fountain into operation was led by the Director of the Český Krumlov State Castle and Chateau PhDr. Pavel Slavko and the Vice-minister of Culture Zdeněk Novák.

Part of the ceremonial opening was, of course, a rich cultural program. Over 150 castle guests enjoyed the antics and talents of the historical knight group ARGO, members of the ensemble Cappella Accademica, and local practical jokers Association Proradost. Amidst conversation, merry-making around tables full of selected morsels, and wetted palates (many times even drenched bodies) of fine wine spraying directly from the fountain, one could meet with jugglers, fencers, musicians, dancers, even fire-eaters.

Proradost had also prepared a public 3-dimensional presentation of part of the Official Information Systém of the Town and Region of Český Krumlov. Fountain activity was supplemented by a presentation of the skills of a department of VUML - večerní univerzita mladého lodníka (Evening University of the Young Boatmen).

The evening (officially) closed with a performance of stylish male acrobats and a fireworks display - both events were accompanied by an appropriate musical background of the "Vltava" (known by most as The Moldau) by Bedřich Smetana. The high representative of the group Proradost appreciated mostly the efficiency and beauty of the male acrobatic performance. Their costumes, sparkling and glittering, elegantly shimmered above the surface of the water, and the unrepeatable consonance of the sensitive movements of such masculine bodies with the music put the viewers into a trance. High-stepping water tricks, deep submersions, and tricky choreography would have made any expert jealous not to have such a performance and such members on his own team. The excellent choreography, not to mention the quality of the outfit designs which so faithfully complemented the curves of the participating acrobats left a deep and lasting impression in all viewers.

In closing, we must of course thank all organizers, sponsors, named firms and those present for a beautiful evening which has been irreplacebly written into the history of the Castle Gardens in Český Krumlov.