Fountain in the Ist Courtyard in Český Krumlov Castle

This fountain is situated in the middle of the little park in the Ist courtyard in Český Krumlov Castle, the former tiltyard. It is not known exactly when the fountain was built, although according to the five-petalled rose on the middle pillar below the water outlet, we can conclude that it was built before 1601, when Peter Wok von Rosenberg sold Český Krumlov to the emperor Rudolf II von Habsburg. Another guide for determining the time of its origin may be considered as when water was installed in this place in 1560-61. The fountain is dated as from the year 1561. 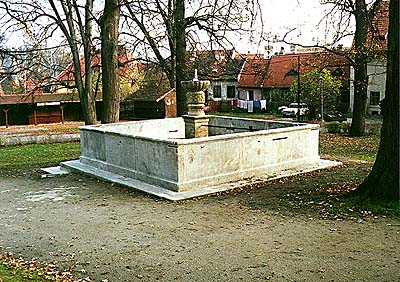 Originally the fountain was situated in another place, probably where there are wooden stands with refreshments now, somewhat farther to the northwest. In the early 17th century, the fountain temporarily stopped serving its function - at that time there arose the need of a water source inside the castle walls that would be independent of external sources. The water-supply line from the hill Kleť, from which the fountain was supplied, did not suit these needs, (see Castle Water Works), and in 1618 - 1619 a new well was dug in the tiltyard. Some time in the latter half of the 17th century the stone fountain was put into operation again. In 1853, by order of Johann Adolf II zu Schwarzenberg, the entire area of the tiltyard, then taken up by gardens, was rearranged. The gardens were abolished, the adjacent coach houses (Castle - Coach houses) were repaired, and the courtyard terrain was levelled. The fountain was placed in the middle of this newly-arranged courtyard and the surrounding area was planted with young trees.

The now tall and stately trees, together with the fountain, form a small peaceful area on the main route leading into the castle area.