Location :
The extensive former stables are situated on the left side of the entrance area in the Ist Courtyard of Český Krumlov Castle. 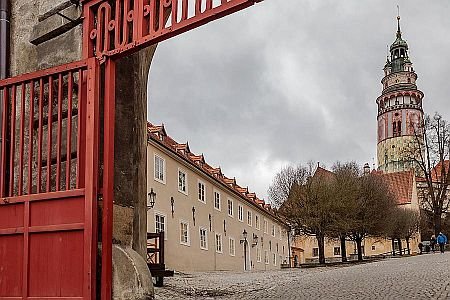 Description :
The facade of this building reflects the reconstruction that took place in 1878 when the level of the floors was changed. Today the building is tree-floor and without a basement, but has a modern style attic. The connecting corridor led through the former truss connecting the castle and the Minorite monastery. It linked Castle No. 58 - Old Burgrave´s House to Castle No. 46 - New Pharmacy and the Red Gate.

History of its formation :
The basement\'s stonework has retained the characteristics of its Renaissance origin, but it is possible that in medieval times a small stable stood here. In the Renaissance period the level of the stable was somewhat lower than the courtyard terrain. Above the vaulted stables there were three floors including the attic usually used as a granary. Not much structural change happened until 1878 when the store-stable was rebuilt. The level of the floor was alligned with the terrain of the courtyard, the vaults were taken down to build the three-winged cross vaulted pillar hall. In this way both sections of the building could be used. The central wing was still used as an entrance. A flat-ceilinged floor was built over the vaults. The stables and the granary were used in this form for many decades. In 1938 it was converted into offices, then during 1939 the local NSDAP (Sudeten German Party) chose this building to establish a meeting hall - they used it till 1944. The offices were taken over by the state government in 1946, and since the 1950\'s it has been the property of Public Security. In 2015-16 the building were sensitively rebuilt to fit the style of the 1940-50´s.
The Study Centre provides cordial and elegant facilities for educational study visits, professional and expert conferences, workshops and seminars, chamber music concerts, club meetings and/or community assemblies.

Archive of photografy
View of the building before the reconstruction in 2015-2016.