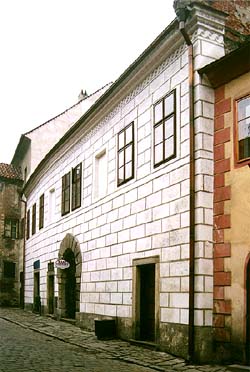 Location :
The old royal pharmacy is situated on the site of the original fortifications from the 14th century. The main facade faces Latrán, while the rear of the building is now a part of a building on the Ist Courtyard of Český Krumlov Castle.

Description :
The building is single-storied and situated on a slope. The ground floor thus exits beneath the level of the courtyard and in the rear of the building is utilized as a basement. The first floor is on the level of the courtyard and from this side serves as a ground floor. The facade of the building facing Latrán is richly decorated in Renaissance style in contrast to the rear facade, which is Baroque and much simpler. The entire building is covered by modern metal roofing.

Historical building development :
The oldest parts of the building evidently come from the 14th century, as is implied at by the many Gothic elements preserved mostly on the ground floor. The building was reconstructed several times during the Renaissance; there is no preserved documentation of this, but the building itself speaks of it clearly. One of the reconstructions evidently took place after the fire in 1610, which devoured most of this part of Latrán. The next fundamental adaptation was from 1729-30, when a pharmacy was installed here. A laboratory was installed facing the courtyard, and the existing interiors were converted into a shop with working space. The building was reconstructed several times until 1915 when the pharmacy was discontinued, but without any major changes. In 1915 the freed spaces on the first floor were converted into flats while the ground floor into a shop near the street. The building was generally repaired in 1937-38.

Significant architectural details :
From the architectural perspective, the most interesting is the ornamental Renaissance facade with the portal which evidently used to function as a vehicle entrance into the courtyard. Renaissance vaults and Gothic portals have been preserved in the interior.

History of residents :
The first written mention of the building comes from 1587. Before 1575 the house belonged to Dorota Slepičková of Radkovice, the wife of the Rosenberg regent Jakub Krčín of Jelčany and Sedlčany. He inherited it after her death and in 1587 sold it to the Krumlov municipality. The minicipality sold it in 1588 to maltster Jiří Studniček, who lived here until 1591 when he sold it to the Rosenberg clerk Bartoloměj Flisspach of Flisspach. The Rosenberg ruler Peter Wok bought it from him so that he could give it to his servant Jan Hagen in 1597. Hagen\'s ennobled son, the knight Jan Hagen of Schwartzbach and Černodub, sold the house in 1635 to the new owners of the Krumlov estates, the Princes of Eggenberg. The building was used for accommodations for higher castle clerks until the beginning of the 18th century, then in 1730 the royal pharmacy was installed here. It served this purpose until 1915, when the pharmacy was relocated to house no. 46. Flats were constructed in its place, while on the ground floor was a shop with soda water, royal milk, and later an ironmonger\'s.

Contemporary use :
Today the building houses a butcher\'s and a shop with cut glass. On the first floor are accommodations and flats.