Location :
A royal clerk\'s house known as the Burgrave\'s house, it is located at the top of the hill of the Ist Courtyard of Český Krumlov Castle, left of the castle stairs. 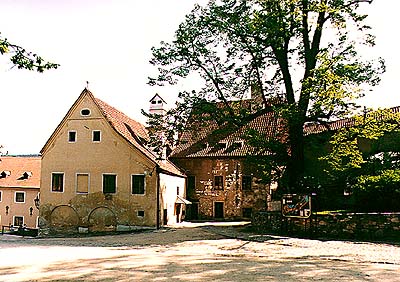 Description :
The building is two-floored, partially sunk with a basement of double depth. It is divided into two wings.

Historical building development :
The building has an irregular groundplan in which elements of Gothic, Renaissance, and Baroque have been revealed. The ground floor\'s Renaissance appearance has been preserved, mostly with the vaults and the double-framed staircase. The first floor displays evidence of newer reconstructions from the 19th and 20th centuries, for example lower attics and a modified interior. A Renaissance attic of Gothic type has been preserved above the eastern wing. On the western side, the connecting corridor leads through from the castle to the Minorite monastery. The northing wings has a younger attic, being late Baroque - early Classic. The Gothic and Renaissance cellars are remarkably deep; they reach a depth of 620 cm below the ground level.

Significant architectural details :
The most significant architectural element is an uncovered gothic window at the upper basement behind the castle walls, which attests to the gothic foundations of the building. Also here is the aforementioned Renaissance staircase with criciform crest fields on the ground floor, and landing with transverse barrel segment vaulting on the first floor. On the first floor, and partly on the ground floor, there seems to be preserved older and artistically valuable truss construction. 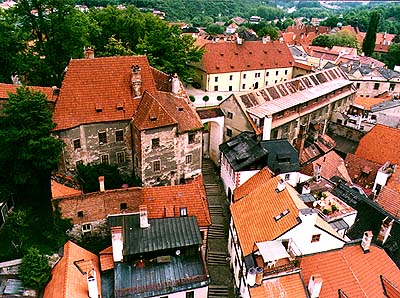 History of residents :
The history of the house evidently reaches back to the 15th century, but the first written evidence of the building comes to us from 1600, when it was mentioned as a scribe\'s residence. In 1624 the building served the purposes of several people. The Burgrave lived here together with the forest scribe and the scribe for retirees and orphans. It was used as such until likely the 18th century, when it became the residence for the Prince\'s Burgrave. From the end of the 18th century the tax collector also lived here.

Contemporary use :
Today the house is used for flats.