Location :
This building, which was named Buchhalterie in the past, is situated in the IInd Courtyard of Český Krumlov Castle on the site of the former castle fortification where the drawbridge and gateway separated the castle and settlement around the castle.

Description :
The single floored building has two wings. Through the south one wing leads the gateway which ends on the bridge above the bear moat. The second wing borders the IInd courtyard on its north side up to Castle No. 59 - Dairy. Both the courtyard facades are decorated by a mural from the 17th century. The others are not so adorned except for their architectural elements. The truss above the wings is of Renaissance origin.

History of its formation :
Under Wilhelm von Rosenberg, the architect Baldassare Maggi of Arogno built this house in 1578. At that time a gateway with drawbridge was at the entrance to the IInd courtyard. 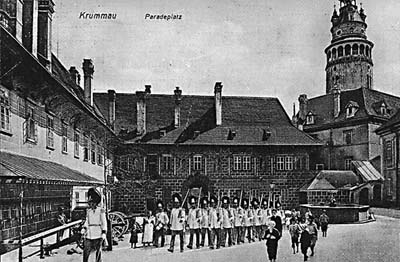 The facades were decorated by the famous painter Gabriel de Blonde. Not many structural changes happened until the start of the 18th century, when in 1708 the first major changes took place. The drawbridge over the "Bear Moat at Český Krumlov Castle" was replaced by a stone bride with sculptures and vases in 1760. In 1800 the first floors of both wings were converted into classrooms, cabinets , residences and a kitchen of the Schwarzenberg Economic Institute in Český Krumlov. A part of the groundfloor of the north wing was adapted into a casino in 1842. After several small adaptations the building was changed essentially in 1928-31, as the Castle Archive in Český Krumlov and the Castle Library in Český Krumlov were placed there.

Remarkable architectonical details :
The palace building contains several architecturally meaningful details. Most importantly are the original Renaissance facades - boasted portals, window jambs, vaults, original mural as well as paited ceilings and the Renaissance decorations on the first floor of the object.. The building stands on enourmous vaulted cellars which have no match in Czech castles and mansions with the exception of Prague Castle. The cellars leading out to the park contained stables.

History of the inhabitants :
Originally there were offices and flats situated in the above floors. From 1602 a bakery and the residence of the superior district administrator was here. In the 1760\'s the Schwarzenberg Guard was transferred to the Krumlov Castle and barracks were established on the ground floor on the dairy side of the object. From 1752 a brewery was started. In 1800, the Schwarzenberg agricultural college was founded. In the basement of the eastern wing there were prison cells which neighboured the place where the bears were kept, until 1803. In the ground floor, next to the main entrance, a casino was opened in 1842. In 1850 the Agricultural college was closed and the precincts were adapted as a living quarters. In 1892 a corner room on the first floor was used by the "Schlaraffia" association which supported arts and humor. The entire structure was overhauled from 1928-1931 for usage as an archive and library.

Current use :
Today there are offices and depository of a branch of the State District Archive of Třeboň - Český Krumlov Branch. The castle library is also there as is the area for bearbreeding.