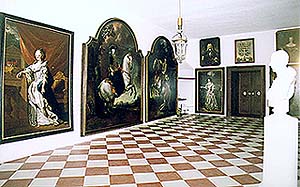 The 2nd Guided Tour in Český Krumlov Castle introduces us to the interiors of the Castle, mainly from the 19th century period, and is completely focused on the Schwarzenberg family. The Schwarzenbergs belonged among the most important and wealthiest aristocratic families in the whole of the Habsburg monarchy. Members of the family settled in Bohemia permanently in 1660 and gradually expanded their estates. Members of the family became renowned for their qualities as landlords, politicians, and military leaders. The portraits in the Gallery show the most important members of the Schwarzenberg family starting with their primal father Erkinger (1362-1435). The next Schwarzenberg, Adolf (1551-1600), became famous as a soldier and was awarded a motif of a Turk with a raven for his coat of arms. Jan Adolf I (1615-1683) was given the title of Prince of the Empire, and Adam František (1680-1732) became the first Duke of Krumlov. Josef Adam (1722-1782) is respected for his Baroque reconstruction of the Castle, Jan Nepomuk (1769-1833) brought a number of significant economic projects to completion which utilized the natural resources of the Šumava, and Jan Adolf II (1799-1888) continued to expand the properties in a creative and economic manner.