Re-installation of the Period Interiors in No. 2 Guided Tour of Český Krumlov Castle

For centuries the interior furnishings of the various castles were being altered. Various objects of the applied arts, decorative artefacts, even personal effects of sentimental value kept accumulating. For the period prior to the 17th century, no movables survived, if any. The situation improved slightly in the 17th and 18th centuries, but if one really wanted to reinstall the castle interiors, 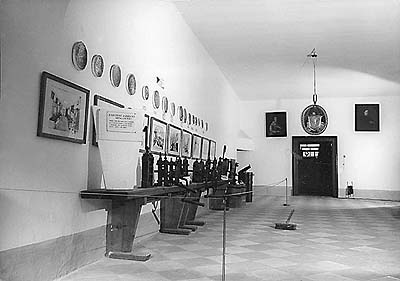 the best guidelines would be those relating to the 19th century. This is a period from which many archival sources survived, such as inventories, deeds, wills, testaments, sales agreements and sales ledgers, which help us to map a picture of the original contents of the various castle interiors. Apart from these written sources, the 19th century was additionally enriched by iconographical material. As far as pictorial evidence demonstrates, it is only the periods of Empire, Biedermeier, and the third quarter of the 19th century, which show stylistically "pure" interiors. It is not only their cultural and historical value which is so precious for us today, but also the documentary significance of the watercolours produced by both professionals (R. and F. Alt, F. Heinrich, J. Ronzmayer, L. Piepenhagen), and quality amateurs in the 1820s and 1840s. It was fashionable at that time for girls of aristocratic birth to depict noble interiors either by pencil drawings or watercolours. 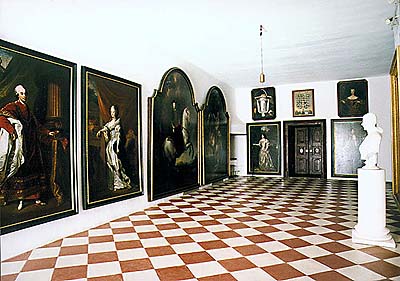 This significant iconographic resource provides us with much singular information about how different interior furnishings were presented, the positioning of furniture, paintings, miniatures, the use of textiles and flower arranging. The documentary function of depicting the castle interiors was transferred in the second half of the 19th century from drawings and paintings to the medium of photography. This enables us to make a precise visual judgement of that portion of the interior which fell within the angle of the camera lens. These photographs prove that the noble interiors were full of various items and were equipped according to the style and taste of their owners. These often included objects of historical and sentimental value.

When the reinstallation of a castle interior is planned, the main task is to gather all available written and iconographic material. The next stage is to compare them and, if still existing, track down the original artefacts stored in the castle depositories. With luck, one will find enough photographs, watercolours, drawings, or other archival material to ensure that the re-installation will be authentic. 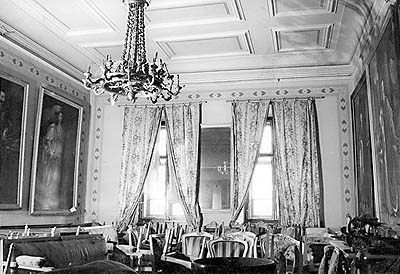 This can only be achieved successfully if the majority of them still survive undamaged. If this is not possible, and the necessary proportion of such articles is missing, one has to create the interior tracing the remaining links with the family that originally owned the property. Even if we have to resort to the latter, we should still refer to and use the archive and iconographic materials. If it is impossible to follow any of the above mentioned procedures, and one has to furnish with items that have no connection with either the family or the property, it must always be specifically mentioned by the guide during the tour. Once removed from its original surroundings, an item loses its identity and historical connections, and becomes only a singular exhibit of limited value.

In the case of the reinstallation of the No. 2 Guided Tour in Český Krumlov Castle, it was possible to work with nearly a complete assembly of movables that were identified through a number of inventory lists from the 19th century, namely the years 1838, 1844, 1858, 1866, 1879, 1886. Thanks to the availability of the archives, an accurate impression of the image and functions of the Duke\'s private appartment in the Český Krumlov Castle during the 19th century could be gained. 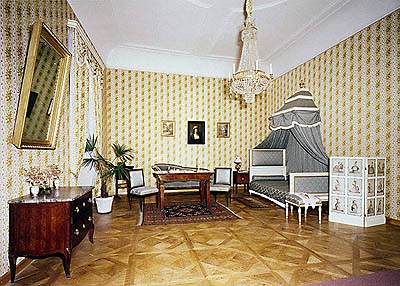 The second half of the 19th century was chosen for the reinstallation of nine rooms, forming the Schwarzenberg apartment. It was a period when Johann Adolf II zu Schwarzenberg (1799-1888) and his wife Marie Eleonora née Princess von Liechtenstein (1812-1873) lived there. The interior is full of various styles. There are pieces in the style of the second Roccoco period, characteristically asymmetric in the positioning of the furniture, and many furnishing accessories. There are also elements of New Gothic and New Rennaissance styles. The period atmosphere of the rooms is completed by a number of colourful drapes, carpets, and even valuable tapestries. The walls are covered with a varied collection of paintings, mirrors, and shelves displaying European and oriental porcelain. 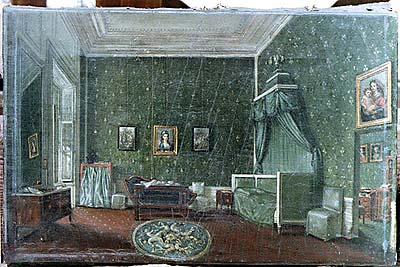 Areas providing complete privacy for their occupants (for the first time in the history) are filled with a number of smaller objects of a personal nature - writing sets, pipe collections, family photographs, sewing baskets. At present there are nine rooms of what used to be a private apartment of the Duke Johann Adolf II and Duchess 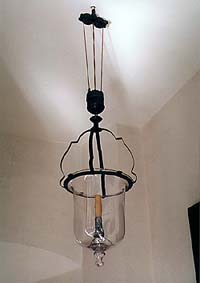 Eleonora zu Schwarzenberg that have been reinstalled. The suite consists of the Reception Room, Salon containing a portrait of the Duchess, Smoking Salon, Reference Library of the Duke, small Dining Room, the Salon of the Duchess, her Study, and her Bedroom with a Dressing Room.

Due to the large volume of the original movables in Český Krumlov still in the Castle depository, and the fact that the Castle archives are still being researched, it is very likely that the exposition will be extended by further reinstalled interior areas.