The pride of two major South Bohemian castles, Hluboká and Český Krumlov, is a valuable and extensive collection of wall-hung tapestries, the largest of its kind in Bohemia and one of the grandest in Europe. Today, both castles contain a total of 85 whole pieces and two large fragments. 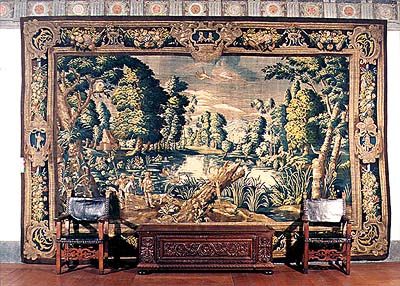 Of these, 25 whole pieces and one fragment are in the Český Krumlov castle. Tapestries contained currently in both castles were originally the property of the renowned noble family, the Schwarzenbergs. The founder of the collection was Adam zu Schwarzenberg, the minister of the Brandenburg elector, who died in 1641. From the original collection there are only two series of tapestries surviving locally. The first one, depicting the Schwarzenberg family Coats of Arms, contains 15 pieces in total, two of which are abroad. Out of the second series, based on Dido and Aeneas, there are only 9 left. Both series were created around the year 1620, probably in Holland. In the unique Dido and Aeneas cycle we can find some traces of Baroque influence. There are also some earlier pieces in the collection, which bear similarities to those collected by Adam zu Schwarzenberg. These are heraldic Eggenberg tapestries with rich ornamental designs in true Renaissance style.

The main part of the collection consists of tapestries of the Baroque period. These were bought in Brussels between 1647 and 1656 by the Archduke Leopold Wilhelm, vice-governor in the Spanish Low Countries and Johann Adolf zu Schwarzenberg, the Higher Hoffmeister of his Court, who bought them only in Brussels because the workshops there were renowned for the most beautiful and best quality wall tapestries. Those that have survived bear signatures of such significance as I. CARDYS, V. van BEVEREN, G. LEYNIERS, H. REYDAMS, G. van der STREKEN, I. van ZEUNEN, certainly the most famous tapestry makers of the Baroque style. From this period there are three complete series, each containing eight pieces, and two in which some tapestries are missing. In the Český Krumlov castle there is only one eight-piece series still surviving. There is also a famous series, called Decius Mus, the originals of which were painted by Peter Paul Rubens,

of which there are only three pieces remaining. We suppose it is actually a newer series, the original paintings of which were created by two other painters. From the three previously mentioned pieces only one, "Mars" and "Rhea Sylvia", was actually made according to the original Rubens drawing, but originally this was part of a different series. The other two pieces, "The Handing over of the Insignia", and "The War Council", were woven following the drawings of Rubens´ pupils and successors. The castle collection also contains two series of tapestries, called "Verduras". They are "Hunts" and "Dutch Countryside". Each of them has borders that are typical of Brussels tapestries of that period: rich architectural borders with spiralled columns on the constructions, decorated with fruit or flower garlands. The "Dutch Countryside" series, also probably woven in Brussels, have a different type of border motifs, i.e. cartouches and flower garlands. All the tapestries are of superior craftsmanship and the finest material.

The most unsophisticated tapestries surviving in the castles of South Bohemia are those depicting animal scenes. Johann Adolf zu Schwarzenberg inherited them from his relative Mary Elizabeth, the widow of the last Bavarian Schwarzenberg. It is a series of seven very crudely woven pieces, all of which still retain their original brilliant colours.

Three more "Verduras" from a different series are kept in the Hluboká castle. All "Verduras" were made during the 1640s in some of the Flemish provincial workshops, most likely in Audenarde.

All the above mentioned tapestries are today a part of the Suite of Eleonora zu Schwarzenberg in the second route of the Český Krumlov castle, and in the Schwarzenberg Baroque Suite in the first route.