The wall paintings on the facade of the IVth Courtyard of Český Krumlov Castle come from the 1580´s. At some unknown point, likely in conjunction with the Baroque reconstruction of the castle, the murals were covered with a new layer of plaster. They were uncovered and restored (as far as we know, for the first time) in 1910 - 1913 under the irection of the Vienna restorer and painter Teofil Melicher. 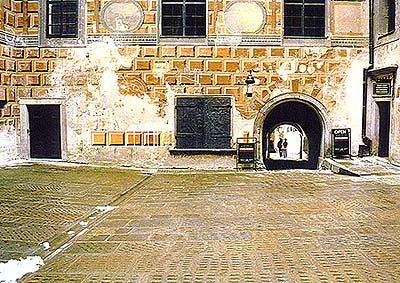 Melicher´s restoration work involved partly retouching the valuable preserved (about 30% of the facade) Renaissance murals and partly painted over them. In places where the original mural hadn´t survived, mostly at the first floor level, the areas around later window openings, and under windowsills, he reconstructed the paintings. Melicher´s written documentation and part drawn and part photographed documentation of the restorational work are stored in the State Regional Archives in Český Krumlov. 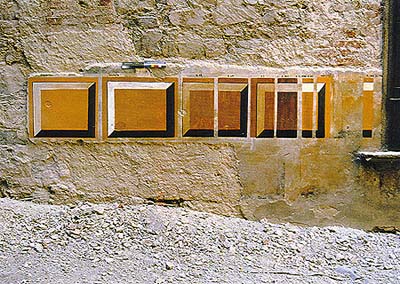 The murals in the IVth Courtyard were restored for the second time in 1971-1975. The first phase of the restoration work was entrusted to the restorers Petr Bareš and Jaroslav Rezek. In 1971-1972 they carried out mostly preventive covering (with gauze and waterproof paper) and transfers (removed and stored in the depository) of the most badly damaged areas. In the following years 1973-1975 gradual restoration work was carried out on all facades of the Ivth courtyard. The team of restorers consisting of Petr Bareš, Jan Hála, Věra Králová, Vladimír Lachout, Dana Vachudová and Jan Vachuda carried out, surficial and deeper stabilization of the plaster and layers of paint, removal of transfers, cleaning of the paintings, and removal of inappropriate retouches, overpaintings, and reconstruction and filling in of damaged plaster. Next the original Renaissance murals were retouched, the reconstruction from 1910-1913 was retouched in areas where the color differed from the original (but was still functional), and new plaster and paint was applied in the most badly damaged areas. Documentation of the restoration process from 1971-1975 is archived at the State office for protection of monuments in České Budějovicece.

In order to more effectively preserve the wall material, plaster, and wall paintings on the IVth courtyard, research was carried out in 1978-1979 by Václav Sokol and Jiří Ebenhöh to locate the source of humidity, including a proposal for its resolution. The research is stored in the State office for protection of monuments in České Budějovice. 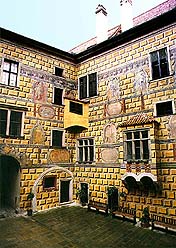 The latest restoration of the paintings was carried out in 1997. After the appropriate firm was selected, the work was entrusted to the restorers Josef Novotný and Petr Novotný. The objective of the restoration was poposed and work was supervised by Pavel Jerie (State Office of Monument Care Prague) and Petr Pavelec (State office for protection of monuments in České Budějovice). The objective of the restoration was to not change the essentially preserved and surviving appearance of the facade, while maximum emphasis was placed on rehabilitation of the original murals (about 30% of the wall area) and its nonagressive conjunction with later supplemental painted work. The restorers carried out complex research of the paintings, and stabilized the surficial and deeper layers of both plaster and paint. Next the paintings were cleaned, inappropriate reconstruction work of overpainting and retouching was removed or weakened, disturbed plaster was filled in, and retouched areas and those areas which were the most badly damaged (mainly at the ground floor level) were given new plaster and reconstructed with painted decorations (frescoes). Finally the entire painted area was conserved. Documentation of the restoration work is stored in the archives of the State office for protection of monuments in České Budějovice and in the offices of the State Castle and Chateau Český Krumlov.