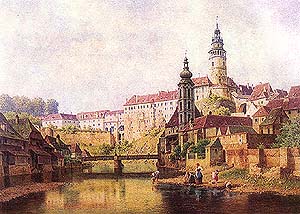 At the beginning of the 20th century, Prince Adolf Joseph zu Schwarzenberg (1832-1914) began to consider the reconstruction of Český Krumlov Castle. In 1900, in view of the castle\'s cultural and historical importance, he decided to open some of the Schwarzenberg staterooms to the public. In 1909, restoration work began of the paintings in the Masquerade Hall, castle courtyards (IIIrd Courtyard of Český Krumlov Castle, IVth Courtyard of Český Krumlov Castle) and frescos in the Renaissance rooms which had been whitewashed in 1748. The work was entrusted to artist Theofil Melichar from Vienna whose techniques, however, produced heated disputes among experts.

Prince Johann Nepomuk (1860-1938), the new ruler, had to face the establishment of the independent Czechoslovak State abolishing aristocratic privilege and the economic consequences of laws on land reform, completed in the year 1931 ,which led to the loss of the Schwarzenberg\'s vast land funds, goods, forests and industrial enterprises.

In the year 1939, the last representative of the family, JUDr. Adolf zu Schwarzenberg (1890-1950) went into exile, and in 1940 the Gestapo confiscated the property of the Schwarzenberg family. After the war, in May 1945, The Czech National Administration was established. In 1947, the Act No.143/47 Col. "Lex" Schwarzenberg came into force and the property of the Schwarzenberg primogeniture located in the Czech territory was passed to the Lands of Bohemia. After abolition of provincial system in 1950 the property definitely became the possession of the Czechoslovak State and the State Heritage Authority in Prague, which began inventory of tangible property, took charge of the castle. Pursuant to the Act No. 22/58 Col. on historic monuments the Regional Centre of State Heritage Authority took charge of the property; from the beginning of the 1960\'s to 1972 the State Castle Český Krumlov was in administration of District National Committee in Český Krumlov, then it returned to the administration of Regional Centre of Heritage Authority and Nature Protection. The Ministry of Culture of the Czechoslovak Republic established the State office for protection of monuments in České Budějovice, pursuant to the Act No. 20/87 Col., in force from 1 January 1991. From that time on the State office for protection of monuments in České Budějovice enforces the right to manage the national property including the Administration of Český Krumlov Castle.

The Czechoslovak State opened the castle gates to the public. However, the maintenance of the castle complex required huge amounts of financial means and the castle began falling into disrepair to due lack of such funds. Many domestic and foreign experts were well aware of the unrivalled status of this monument. The Český Krumlov Castle gained the highest historic monuments preservation status - in 1963, the town was declared to be a Town Preserve; in 1989 the castle became a National Monument; in 1992, the complex was included onto the list of UNESCO World Cultural Heritage Monuments. The castle is open to public and the most imposing interiors and exteriors can be visited at the present time. Within the two guided tours (No.I Guided Tour of Český Krumlov Castle, No.II Guided Tour of Český Krumlov Castle) in the upper part of the castle visitors can be acquainted with original historic interiors dated from the 16th, 18th and 19th centuries that were reconstructed according to the period inventory and iconographic materials. The castle tower with a gallery (Castle No. 59 - Castle Tower) and the adjacent premises of the Little Castle are open to the public as well. Exhibition halls housed in the building of Mint (Castle No. 59 - Mint) and Dairy (Castle No. 59 - Dairy) in the IInd courtyard offer thematic exhibitions from the castle depository during the season. The four storeys of the Gothic and Renaissance Cellars in the IVth Courtyard of Český Krumlov Castle accommodate an exposition of international ceramics. The interior tour of the re-opened Baroque Castle Theatre in Český Krumlov where trial tours are running is immensely interesting. Over forty buildings and palaces situated around five castle courtyards as well as the extensive Baroque park are available for exterior tours (Tourist Service within the Český Krumlov Castle Complex).

The programme of tours is carried out in parallel with many cultural and social activities that take place during the whole season. Its tradition has already established four festival projects, dozens of evening concerts and performances, opening days of exhibitions, international congresses, symposia or seminars and other Cultural and Social Activities at Český Krumlov Castle. 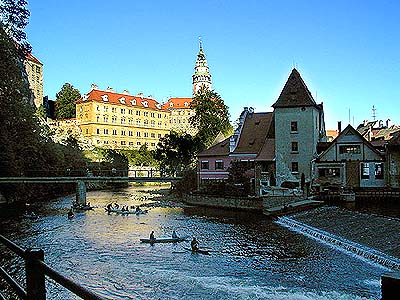 It is the Restoration of Český Krumlov Castle - now and in the near future which focuses on the maintenance and enhancement of the originality of the castle complex that is the paramount task of the Administration of Český Krumlov Castle and other co-operating institutions, the operator - Ministry of Culture of the Czech Republic and the administrator State office for protection of monuments in České Budějovice.