The area of the Vth courtyard is accessible from the buildings of the Upper Castle across the so-called Cloak Bridge, a work of unusual and impressive construction. The covered three-storey corridor was erected on massive pillars vaulted together on each storey. The original drawbridge over the Middle Ages moat was replaced by the stone construction during building stages in 1686, 1707, 1748 and 1765. The corridor in the lower storey connects the Masquerade Hall with the Castle Theater in Český Krumlov, and the Connecting Corridor located in the upper storey of the bridge enables passage up to the castle park. 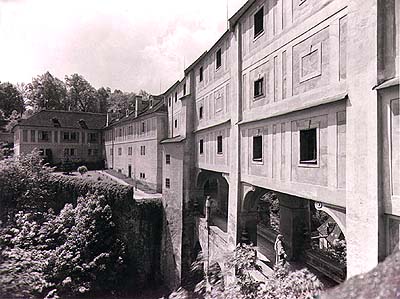 The Vth courtyard, originally created by fortifications and farm buildings, remarkably changed its character in 1681 when the theater building was set up. The stone terraces levelling out the terrain and fortifications offered suitable grounds for building expansion towards the west. In 1684, Prince Johann Christian I. von Eggenberg had the theater built there. The building was once more remodelled in 1766. The Baroque castle theater is, in the words of a great supporter and admirer of the theater, Professor Peter Perina, "....the most precious gem in the theater crown of historic heritage on our planet." Thanks to the entirety of the original equipment the theater serves as an example of an ingenious stylistically and technically mature Baroque stage. The original fund is preserved in both extensive archival documentation of repertoire as well as in object equipment such as auditorium, stage, stage technology, scenery, costumes, stage properties, and lighting technology. 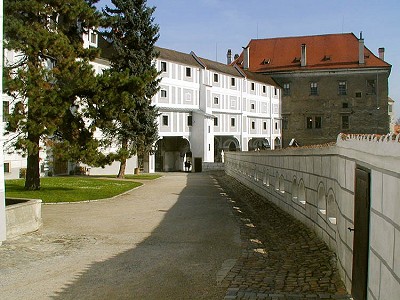 The Renaissance House (see Castle No. 177 - Renaissance House) of which the western peripheral wall is a remnant of mediaeval fortification, is an integral part of the theater building. The present-day disposition, at least in the ground-floor premises, was most probably set up according to a project by builder Antonín Vlach around the year 1570. In 1765, the first storey was rebuilt, the attic together with the corridor of the Cloak Bridge was remodelled and the facade was harmonised with that of castle theater. The iron gate with the building of Porter\'s Lodge (Castle No. 60 - Porter\'s Lodge) closes in the Vth courtyard of the castle complex. Other buildings are situated in the castle grdens. The path on the right leads to the park section called summer riding ground which served as a summer horse-riding training area in the past. The classic winter Riding Hall was built in the near vicinity of the summer riding ground by the architect Andreas Altomonte around the year 1745. Sumptuous stucco decorations were created by the sculptor Jan Antonín Zinner and plasterer Mathias André. 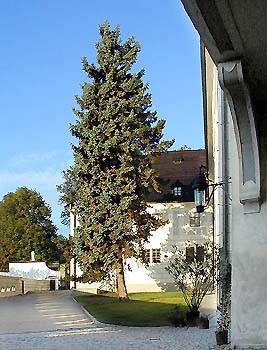