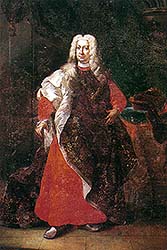 The story of the tragic death of Prince Adam Franz, who was shot by Emperor Karel VI. during a deer hunt, reliably captures the attention of the visitors of South Bohemian castles of Český Krumlov, Hluboká or Třeboň when listening to the history of the Schwarzenberg family or when looking at the portrait of Prince Adam Franz. To give a bit of spice to the story, it sometimes goes as far as to say that it wasn\'t an unfortunate accident but rather an intentional act for many reasons; some of the legends imply various scandals or suggestive tales. What is the true story and what really happened during the hunting in Brandýs? The history of the Schwarzenberg family doesn\'t pay much attention to this tragic accident, so all we can do is sink into the period sources. After all a man lost his life in that accident, moreover the ruler of the Krumlov dominion.

Prince Adam Franz zu Schwarzenberg (1680-1732) became famous mainly thanks to the fact that in 1719 he extended the dominion and estates left by his father Ferdinand (the most important were Třeboň and Hluboká) by the property of Princes von Eggenberg (Český Krumlov, Prachatice, Netolice, Vimperk, Orlík and other property) thus creating the family dominion which didn\'t expand much during the rule of the following generations. In 1701 he married Eleonora Amalie von Lobkowicz (there were different sorts of rumours about their marriage) and became the first Český Krumlov Duke of his family and a prototype of a Baroque cavalier, holding many posts at the imperial court. At the beginning of his service he was a marshal of Emperor Karel VI., then he became his private advisor and finally in 1720 he was appointed the supreme marshal. He belonged among people who surrounded the ruler and undoubtedly had an influence on his decisions and actions. He became famous as a distinguished patron and builder (e.g. castle Ohrada u Hluboké). He was also well-known as a zealous supporter of the cult of St. Jan Nepomucký (he is said to have made peace with his wife after the long-year split above his grave) as well as a keen hunter, whose passion turned out to be his fate. Another protagonist of our story, Emperor Karel VI. (1685-1740) was the son of Emperor Leopold I. and ascended the throne after his elder brother\'s untimely death. At that time he had already gained experiences from the struggle for the Spanish throne left unoccupied after the Spanish relatives died out which he, however, had to give up on behalf of his rival Filip of Anjou as his allies disapproved with the idea of union of the Spanish and Austrian Habsburg possessions. The Habsbursg family died out on the sword side and after his death, his oldest daughter Marie Teresa inherited the throne by the pragmatic sanction. Although he waged many not very successful wars he was interested in arts, particularly music. However, it was hunting that was his greatest passion. He took every chance to take part in hunts and got truly "noteworthy" results. Despite the fact that such interests were nothing unusual in aristocratic circles one of his hunts left its stamp on him more than he had ever wished.

Our story takes place at the beginning of summer in 1732. Český Krumlov, the main residence of the Schwarzenbergs, was in preparations for the Emperor\'s visit which was expected on his way back from treatment in a West Bohemian spa he had visited with his wife Elisabeth Christine. After his return, the Emperor, as well as the noblemen of his escort including Adam Franz, called upon Prague to entertain themselves with hunts in the vicinity of the royal capital. One such hunt was the deer hunt at the imperial estate in Brandýs nad Labem which took place on June 10th 1732. The participants in this diversion gathered in the deer forest, deployed themselves in the bush and waited for the chance to shoot. At this moment they made a fatal mistake, as some of them, namely the Emperor and his highest marshal, stood only 80 paces from each other (about 60 metres), right in the line of fire. When the beaters drove five deer out of the reedy bank of the river, one deer ran straight towards the meadow where the noble hunters were posted, between the Emperor and Prince. After being given a sign the Habsburg, who as a ruler had the right of first shot, fired his gun but instead of hitting the deer, the bullet hit the fence of the garden of a Brandýs distiller. As the hunt went on, another deer ran into the fateful meadow, and this time His Majesty was a bit more successful. Although he missed the deer, he didn\'t miss the Schwarzenberg aristocrat. The Emperor\'s bullet passed through his left hip into his intestines and right kidney and stopped in the adipose tissue below the right hip. The wounded Schwarzenberg cried out in pain and sunk to the ground.

Naturally, the hunting diversion ended. The last moments of Prince Adam Franz\'s life can be followed thanks to the notes taken by his valet Viktor Jaus for family purposes and perhaps even for the possible inheritance proceedings. The wounded prince was put on the small horse carriange and brought to the Brandýs castle where he was laid in the room of the estate administrator to the right of the gate. The Brandýs dean was hurriedly called in on the prince\'s wishes to administer the last rites and confession, as the imperial surgeon Antonín Hautzinger, who had been present at the hunt and immediately dressed the wound, had implied that it was a fatal injury. The bad tidings were reported to the Emperor who, obviously distraught and moved, threw away his hat and wig and was about to go see the poor Prince. His companions diverted his intention and asked him to wait and let the wounded Schwarzenberg give voice to his idea, reasoning that it may not be welcome. Indeed, the Schwarzenberg refused his visit saying, "Don\'t let the Emperor visit me and torment himself with remorse, as it was God\'s will, thus it happened." After receiving such a message the Emperor really did give up the intended visit, despite having been waiting in the place of the fatal shooting. Upon hearing that the Prince had been given the last rites, the appalled Emperor left the forest and hastily returned to Prague. 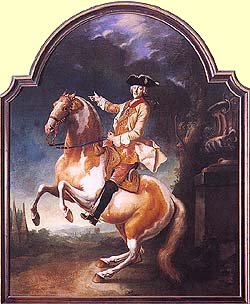 Meanwhile the Prince had been reconciled with God and had his hunting outfit removed to face death in the company of his huntsman Jan Jiří Reinhard and valet, mentioned before. "Having employed so many people," the Prince lamented, "I have to lay in a wretched state in someone else\'s bed having no one around but my huntsman. That\'s how we people end. I \'m completely wet and have no shirt to change. Jesus Christ! Give me strength and have mercy on me!" Later, as he began passing urine with blood, he moaned: "Now I\'m nearing the end. It\'s God\'s wish. No miracle will happen and I \'m ready to die." Then he called for other companions, had the door locked and asked all present to go down on their knees. He said: "I bless you for my wife. Tell her that I bid her farewell. Raise well my son (at that time minor Joseph Adam zu Schwarzenberg), take care of all my folk and servants and get on well with my son\'s future guardians. I bless you for my son. Tell him to obey his mother and be her support. Now I bless you and thank for the faithful services. Don\'t abandon my son."

Afterwards the door was unlocked and imperial surgeon came in. The Prince dismissed him asking him to go to the Emperor, and told him, "Go back to Prague as His Imperial Highness must have been very distraught and will need a bloodletting. Tell the Emperor that I \'m falling down on my knees begging him to take care of my wife, son, folks and servants and not to leave them. It was God\'s decision that I was wounded by His Highness. When I get to heaven I will ask God to give him a successor and a long reign. Don\'t let the Emperor blame the Czechs for my fate."

On June 11th at 2 a.m. two Capuchins sent by the Emperor from Prague arrived. During their prayers the Prince felt he was nearing his end. He couldn\'t see or hear, and his heart was beating irregularly. At 3 a.m., about twelve hours after he suffered his wound, Adam Franz zu Schwarzenberg passed away. His body was put in a simple coffin and carried to Prague in a procession of his servants and friends. Near the town a team of six horses from imperial stables was hitched up to the cart and conveyed the deceased to the Schwarzenberg palace in Hradčany. In the afternoon the post-mortem was done and the bullet was removed from the body (it is kept together with the outfit of the deceased in the Český Krumlov castle). According to the old custom the viscera and heart were taken out of the body and placed in separate vessels. Then the body was embalmed. A week later the deceased was conveyed to Vienna while the vessel carrying the heart was sent to Český Krumlov and the vessel carrying the viscera to Třeboň. During the burial services on June 25th 1732 the coffin was placed in the family crypt next to the altar of St.Mikuláš Tolentinský in the Augustinian Church of Capuchins in Vienna. The next year the body of the deceased, still buried in the double wooden coffin, was put in a sumptuous copper coffin borne by six lions. The tombstone of Adam Franz is preserved up till now. The Prince\'s heart, carried in the metal vessel, was buried in the chapel of the parish St. Vitus\' Church in Český Krumlov (it is there to this day) and the viscera were buried in little cemetery Church of St. Jiljí in Třeboň. 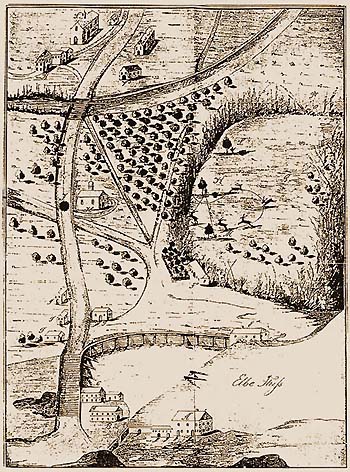 The Emperor was well aware of his responsibility for the Prince\'s death and endeavoured to adequately compensate for his fault. As early as July 6th 1732, just one month after the tragic accident, he decorated the ten-year old Joseph Adam, the son of the victim, with the Order of the Golden Fleece. He was not able of carrying out other acts of kindness, however, until Joseph Adam came of age.

Adam František of Schwarzenberk´s coat, which he wore during the hunt at Brandýs nad Labem in 1832. On the right is a hole after deadly shot. (Collection fund of state castle and chateau Český Krumlov)

The course of the tragic accident went under investigation of a special commission which couldn\'t come to a different conclusion that it was an unfortunate accident, taking into account the rank of those involved. The investigators didn\'t leave out a visual account of the event - the drawing is preserved up to now in State District Archive Třeboň, Branch Český Krumlov. According to investigators, the fatal mistake was the position of the hunters when the Emperor and Prince stood unknowingly opposite each other. It was only a matter of time before one of the hunters would endanger his counterpart by shooting after the deer running between them. We can only guess what would have happened if the fatal shot had been fired from the opposite side...