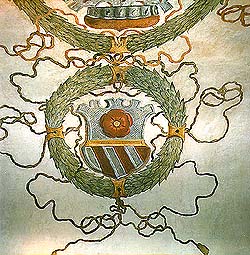 In modern times, the houses we live in are numbered to enable orientation while in former times, signs or other iconographic symbols which somehow represented the house-owner served this purpose. Similarly, the coats-of-arms of those who resided in palaces, castles or chateaus in many cases refer to the owner of the building up till now. If the building changed hands several times we can acquaint ourselves with the concise history of the object which was engraved on stone or immortalised in some other way. To an ordinary visitor it may often have a tinge of a riddle, as there used to live many noble families in Bohemia and their numbers correspond with the number of coat-of arms.

The owners of the Český Krumlov castle also followed the tradition of inscribing their signs on the outer walls. It is generally known whom the second largest Czech castle belonged to, but it is interesting to see where these signs can be found. Standing in front of the bear moat and in front of the entrance gate through which the so-called Guardian courtyard (today\'s IInd castle courtyard) is accessible, we see five different coats-of-arms. Firstly, to follow the chronological order, let\'s pay attention to the smallest and oldest emblem, possibly even the most attractive and valuable one, as according to heraldry - the study of coats-of-arms - the simpler emblem the older the family. In this case, the Rosenbergs who acquired Český Krumlov after their close relatives of the Witigon tribe, the Lords of Krumlov, died out, represented one of the oldest Czech noble families. However, this coat-of-arms dates from a much later period and has no original form. The silver (white) shield with the five petalled rose was used by all generations of the Rosenbergs from the beginning of their rule till the half of 1550\'s. After 1556 the second to last Rosenberg, Wilhelm von Rosenberg, began to use the modified coat-of-arms which resembled to that of the Italian Orsini family. The entirely fanciful and groundless story of his relation to the above mentioned Italian princely family was to rise the fame and glitter of Wilhelm von Rosenberg\'s family at the court of Bohemian Kings of the Habsburgs\' family where the foreign nobility began to assert itself at that time. Wilhelm\'s coat-of-arms : a shield divided by a golden beam on which a black castle is situated, the five-petalled rose on the upper field of silver (white) and three oblique red stripes on the lower field of silver. The emblem was located above the stone reveal scuncheon of the entrance gate leading into the courtyard of the Rosenberg Lower Castle, the later Guardian courtyard, in 1577. The stone reveal lining of the entrance gate from the courtyard\'s side is decorated with the same coat-of-arms.

The coats-of-arms of Johann Anton I. von Eggenberg and his wife Anna Marie, neé Margravine von Brandenburg, are located above the Rosenbergs\' emblem on the outer side of the gate. In 1646, these coats-of-arms made by a special stucco method replaced the red marble slab engraved with the two headed eagle - an imperial coat-of-arms - which was fitted in by orders of Emperor Ferdinand II. in 1620. The short existence of the marble slab, which was not preserved, symbolised the episode of Emperors\' ownership in the Český Krumlov history as Peter Wok von Rosenberg sold the Český Krumlov dominion to Emperor Rudolf II. von Habsburg in 1601. 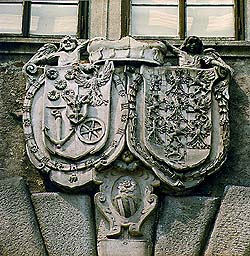 The property was then taken over by Emperor Mathias and Emperor Ferdinand II. who donated Český Krumlov to Johann Ulrich von Eggenberg in 1622 to clear his debts. Since Johann Ulrich virtually didn\'t stay at the Český Krumlov castle he probably didn\'t find the decoration of the castle with his coat-of-arms necessary. Though his son didn\'t reside in the castle he put his father\'s omission to right in 1646. Facing the gate, the coat-of-arms of the Eggenbergs is located on the left-hand side : five five-petalled roses (Český Krumlov) decorate the first field of the quartered shield, a coroneted eagle is on the other field (Postojna in Yugoslavia), the next field is adorned with an anchor (Ptuj in Yugoslavia) while the forth field is decorated with a wheel (Radgona/Radkersburg in Styria), the small heart-shaped shield with three coroneted ravens carrying a coronet in their beaks is situated in the middle (original Eggenbergs\' coat-of-arms). The emblem of the Brandenburg Margraves is situated next to that of the Eggenbergs : the shield is divided in twelve fields, a lion is on the first field (Nurmberg), on the second to ninth field there alternate the Prussian eagle, Brandenburg eagle with Pomeranian griffin, Szczecin griffin, Wendish griffin and Kashubian griffin, the half of a lion behind the wall is on the eleventh field, the tenth and twelfth fields have no paintings - the tenth field of red was intended to be without decorations, and the twelfth field was to be adorned with the Hohenzoller emblem (quartered coat-of-arms with the first and forth field of silver and the second and third field of black). The appearance of the emblem is not faithful as it doesn\'t have all the features of the coat-of-arms of Brandenburg Margraves from the half of the 17th century which can be seen in one of the seals of Anna Marie von Brandenburg, the wife of Johann Anton I. von Eggenberg. 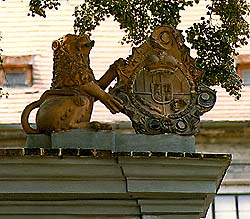 The last two coats-of-arms in front of the bear moat are located on the remnants of fortifications from the beginning of the 17th century. Terracotta eschutcheons were situated on these remains in 1743 and represented Joseph Adam zu Schwarzenberg and his wife Marie Terezie, neé von Lichtenstein. Joseph Adam was the second owner of the Český Krumlov castle of the Schwarzenberg family after his father who inherited the property from the Eggenbergs in 1719. Facing the bear moat the coat-of-arms of

the Schwarzenbergs in its final appearance is located on the left-hand side : a quartered shield has on the first field three vertical stripes (original emblem of the Seinsheims-Schwarzenbergs), three spikes decorate the second field (Sulz in Germany), on the third field there is blazing island (Brandis in Germany), the forth field is adorned with Turk\'s head with raven (in commemoration of the victory of Adolf zu Schwarzenberg over the Turks near Ráb), the painting of a tower on the black hill (Schwarzenberg in Germany) is on the first part of the small heart-shaped shield, the second part is decorated with three sheaves (Kleggau in Germany). On the right-hand side is the coat-of-arms of the Lichtensteins : Silesian eagle on the first field of the quartered shield, the second nine-part field is decorated with a part of the wreath of rosettes (Saxony), the third field is divided in white and red halves (Opava region), coroneted eagle is on the forth field (Schellenberg in Germany), a wedge with hunting horn (Jägerndorf in Germany) is located between the third and forth fields, central small coat-of-arms is divided in gold and red parts (original emblem of the Lichtensteins).

To the right of the terracotta escutcheons, on the former bastions, there is a small slab dated from 1620 with the coat-of-arms of imperial garrison adjutant Ferdinand Carrati de Carrara who operated at the Český Krumlov castle during the Thirty Years\' War.

The coat-of-arms of Wilhelm von Rosenberg from the second half of 1570\'s as well as coats-of-arms of Johann Anton von Eggenberg and his wife Anna Marie von Brandenburg from 1646 in their above-described appearance are also located above the entrance gate to the covered corridor leading from the Guardian courtyard to the IIIrd courtyard (see Corridor Connecting the IInd and IIIrd Courtyards of Český Krumlov Castle). The stone reveal scuncheon of the gate at the end of the corridor leading in the IIIrd courtyard is decorated with the coat-of-arms of Wilhelm von Rosenberg with the added year 1577. 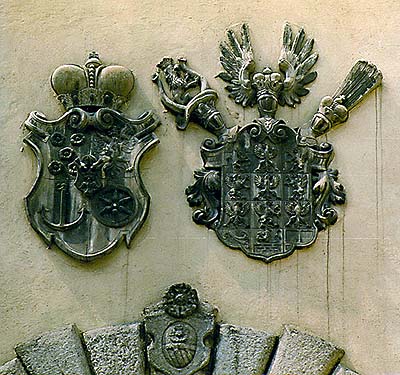 Two five-petalled roses made of stone are also located near the clearstorey above the entrance gate to the covered corridor from the Guardian courtyard\'s side.

The jetty from the year 1513 on the IVth courtyard boast three oldest coats-of-arms in the Český Krumlov castle. Facing the jetty, the emblem of Lords of Kravaře (wrapped bullet) is located on the left-hand side, in the middle is a typical Rosenberg coat-of-arms, plus the emblem of the Lords of Pernstein (aurochs\' head). The Rosenberg coat-of-arms represented Petr IV. von Rosenberg, the Kravaře coat-of-arms was used by his wife Eliška of Kravaře and the Pernstein coat-of-arms belonged to Wilhelm von Pernstein, who was Peter\'s close friend and former guardian of Eliška of Kravaře. The Kravaře and Pernstein coats-of-arms are also engraved in corbels that support the jetty. 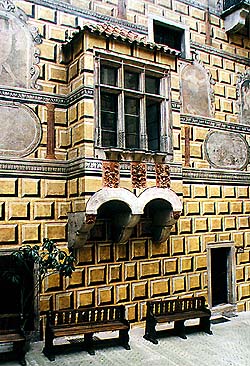 The large Schwarzenberg coat-of-arms from 1760\'s, reminder of the rule of Joseph Adam zu Schwarzenberg, is located above the end of the passage connecting the IVth courtyard and the Cloak Bridge.