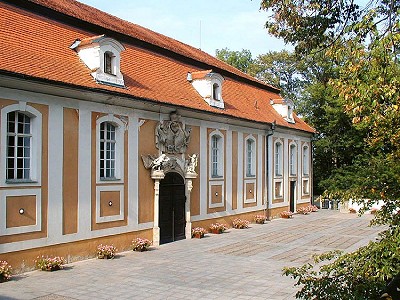 Location and the description :
The simple block building with an attic roof extends from the northern corner of the castle garden. Its lengthwise axe is oriented in the direction southwest to northeast. The castle riding school is not connected with the castle garden directly, but placed quite deeply under its level. Above the level of the balustrade towers only the roof with burn roof-covering and the massive chimney with the ornamental plastering on its peak. The riding school with its long low frontage opening toward the extended terrace of the former summer riding school served as a practice field for horse-riding at times when bad weather made it impossible in this part of the castle garden. Between the summer and the winter riding school there is a rectangular platform, marked off on the southwestern part with the supporting wall of the lower parterre of the castle garden. This supporting wall is divided by a big nika with a concha on its end. The narrow northwestern frontage of the riding school raises from the rocky hill that opens toward the area of the Deer Garden In Český Krumlov. Today the frontage is covered with tree vegetation.

Part of the riding school structure used to be stables for the horses, a three-naved area with nine vault fields, led down in four pillars. It was built underground under the terrace of the lower parterre of the castle garden.

Historical development of the construction :
The area of today\'s castle garden was probably the part of the original Rosenberg garden in the 16th century, mentioned as the garden above the castle. This is testified to by on the one hand the previously-mentioned nika in the supporting wall (without any compositional relation to the terrace of the summer riding school) and on the other hand the discovery of a supporting wall probably of renaissance origin on the access road from the castle.

Two plans of "The New Garden" (dated around 1702) show in the area of today\'s building of the riding school a nearly undeterminable building containing one room accessible via three doors and enlightened with three windows, one of them merged.

The construction of the winter riding school was the first deed during the reign of the young prince Josef Adam zu Schwarzenberg (1741-1782), when his Český Krumlov seat was rebuilt in the spirit of Viennese rococo. 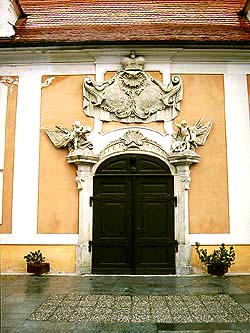 The project was drawn up by the Viennese architect Andreas Altomonte, who later became the emperor´s engineer of the court and fields as well as court theatre painter. The riding school was built between 1744 and 1746. The generally simple building is decorated above the entrances and on the eastern face with ornamental plastering made by the sculptor Jan Antonín Zinner (probably 1708-1763), a graduate of the Viennese academy. Some details are the work of the Viennese plasterer Matyáš André. The motives of the decoration of the supraports and the gable are taken from contemporary military realias - military standards, lances and other battle elementsas well as trophies add a character of triumph to the otherwise very playful and even comical stucco decoration.

The architecture of the riding school (the arrangement of its roomy inner hall with two balconies, the portals and north-eastern gable) is the Krumlov variant of the monumental realisation of the Viennese emperor´s residence. The northeastern gable with the rich sculptural decoration originally played a distinctive role in the long distance views over Jelení garden (today the view is blocked by tree vegetation).

On the sculptural decoration of the interiors, J. A. Zinner the plasterer M. André worked together with the master Josef Dietrich from České Budějovice. The pictorial decoration of the riding school was made by František Jakub Prokyš and Josef Putr. The Viennese court painters Jan Canton and Martin van Maytens created the large hanging portraits of Josef Adam zu Schwarzenberg and his wife Marie Teresa ( originally from Lichtenstein ) in around 1745, and they were placed in stucco frames above the lateral gate of the riding school.

As a whole, the architecture of the winter riding school, with its intactness and in many details well-preserved expression, remarkable historical value. With its conception, decoration, spatial scale and above all with the solution of its frontage, the building faithfully represents the features of the Viennese rococo, being thus unique in the Czech lands.

Contemporary use :
The building is used as a concert and ball hall, and there is also a functional restaurant, both activities managed by Auviex s.r.o.