Location :
This building forms a part of a row of buildings, once used for agricultural purposes, which were gradually built against the medieval Latrán fortifications on the Ist Courtyard of Český Krumlov Castle from the 14th century.

Description :
This complex-shaped structure has three ground-floor wings and a simple saddle roof. From the northern side the facade is formed by the original castle walls reinforced by stone pillars. Between them is a wooden staircase with an extended roof. The internal disposition indicates an older core. 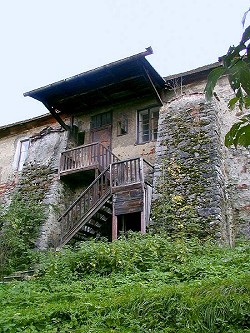 Historical building development :
On the site of today\'s building used to be an agricultural structure set against the castle walls. The level of this structure, judging by the former windows on the north facade and lowered level of Castle No. 184 - Hospital, used to be much lower than today. The courtyard was evidently filled in later, thus raising the ground level. It is also possible that this structure was also destroyed after a fire in 1774, when the terrain was evidently brought to its present level. A wheelright\'s workshop with an opened facade was here until 1920. A project from 1998 provides for the interior and front facade to be modified for residential purposes.

History of residents :
The original structure which stood on this site evidently served some function in connection with the brewery during the reign of the Rosenbergs. In 1645 the new Eggenberg nobility relocated the brewery to the New Town, to the site of the former armoury. The wheelright\'s shop was then located in the freed spaces of this part of the brewery. On December 23, 1774, a fire broke out in the carpenter\'s at Castle No. 65 Brewery and destroyed all the buildings on this side of the forecastle. After the fire there was only a shed at this site, which served different purposes. Another wheelright\'s was here until 1920, when the Schwarzenberg construction director decided to build four small flats for the royal drivers. The flats were merged in 1947.