Location :
This building is one of many in a row of Latrán houses and is no longer associated with the castle complex. Even so, in its early history it was connected with the castle via its rear section and courtyard which form a part of the Ist Courtyard of Český Krumlov Castle. It evidently belonged to nobility at the time, and through its attic led the connecting corridor to the Minorite monastery.

Description :
The building is three-storied without a basement, surrounded on both sides by a closed courtyard. The main facade faces Latrán and has Renaissance sgrafitto ornamentation. It is divided in half by a bridged corridor leading on to the monastery.

Historical building development :
The building\'s construction evidently began as early as medieval times, although still later than on the neighboring plots. A significant step in its development was the construction of the bridged corridor crossing over today\'s Latrán street during the reign of Wilhelm von Rosenberg. The bridge today leads from the second floor, however it originally went through the attic. It appears that at least the first story was reconstructed at the time of the bridge\'s construction. After 1797 a baker\'s oven was installed into the ground floor, while the first floor was furnished with a billiards and refreshment room. In 1806-08 the second floor was converted into a dance hall. The building was converted into flats in 1956, and in 1978 a newsstand was added on the left side of the ground floor. 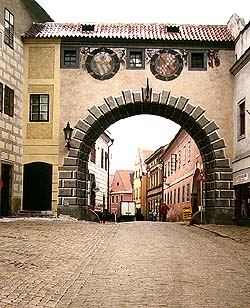 History of residents :
The oldest reliable mention of the house comes from the year 1594, when the last ruler of the House of Rosenberg, Peter Wok von Rosenberg, sold the house to his gem-cutter Hanuš Jindřich Robenhaupt. On the 27th of May 1610, fire erupted from one of the houses "across from the royal monastery", which would be either from no. 56 or from one of the neighboring houses. This fire claimed 9 houses in the near vicinity. Sometime in the following years Hans Sebold Robenhaupt inherited the house. He then sold it to Jan Jiří Diczinger, who in 1652 sold it to the prince\'s coiner Vít Scheiblhoffer. From his estate, the house was taken by the Prince in 1666 for the indebted amount of 159 guilders, and finally in 1706 the house was returned on decision of Prince Johann Christian I. von Eggenberg to the owner\'s successors so that they could sell it for their own profit. In 1706 the prince\'s orphan scribe Jakub František Krch bought the house. His son Karel inherited it in 1736, then Karel\'s son-in-law Jan František Streintz, the prince\'s burgrave. At the end of the century his siblings inherited the house to then sell it in 1797 to the master baker Václav Mayer. He installed an oven here and raised the building one floor. In 1849 the house was inherited by Ignác Mayer, who sold the house to Rudolf Rothbauer in 1882. He then sold the house to Antonín Chaloupek. The house was alloted to the forest authorities Jih in Český Krumlov for flats. In 1967 the building was used by the regional committee of the Czechoslovakian Communist Party and later the SNB and police.

Contemporary use :
The house is unused today.