The wardship of Petr V. von Rosenberg under the children of his brother Jošt and his wife Anna von Rosenberg, neé von Rogendorf, adumbrated the blossoming period of the Rosenbergs\' dominion. It began with the arrival of the last generation of Rosenbergs, brothers Wilhelm von Rosenberg (1535-1592) and Petr Wok von Rosenberg (1539-1611). The family\'s ancient origin, the extensive and profitable dominion, plus as their personal abilities predetermined especially the elder Vilém to rapid social and political growth. Vilém began his career by rehabilitating the Rosenberg family name to its prior position among the noble families in Bohemia. In 1550, as a young boy, he entered royal service and as Vilém was gaining important positions including being appointed the highest Prague burgrave in 1570 - which means the King\'s representative of the country - he had his hopes set on the Polish crown. In 1585, the Spanish King Philip II. awarded him the Order of the Golden Fleece. As a member of imperial delegations and in domestic disputes he demonstrateed excellent diplomatic abilities. Thanks to his origin and four marriages with Kateřina Brunšvická (1557), Sofie von Brandenburg (1561), Anna Maria von Rosenberg, neé von Baden (1578) and Polyxena von Rosenberg, neé von Pernstein (1587) Wilhelm von Rosenberg was akin to the most powerful families of Bohemian, Austrian, German, Spanish, Italian and Polish nobility. The yields of the Rosenbergs domains, new methods of business activities, and incomes from flourishing towns that flowed into the dominion treasury enabled Vilém to lead an extravagant life, keep an expensive court, carry out large-scale adaptations and become a patron of science, music, literature and visual arts. During the rule of Wilhelm von Rosenberg the Český Krumlov Castle acquired the appearance of an imposing and splendid Renaissance seat and became a cultural, social and business centre of the Rosenberg dominion. The Rosenberg ruler was at the head of the aristocratic court surrounded by members of his family, courtiers, ladies-in-waiting, officials, valets, pages and other servants, scholars, and artists. 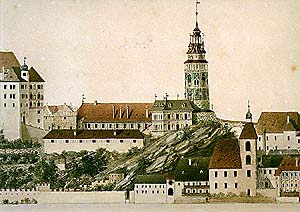 It was as early as in his youth that Wilhelm became fascinated by the magnificent and refined Renaissance style he had seen in Italy during the journey of the Czech nobility in years 1551-1552 to welcome Marie of Spain, the wife of the future Emperor Maxmilián II. After his return to Bohemia, extensive reconstructions of the old family seat were initiated according to designs by Italian master builders and, in the words of the chronicler Václav Březan, "Krumlov castle, old, unkempt, narrow, dark and gloomy he had rebuilt into a merry and spacious palace, leaving no old shape preserved except the old tower." The mighty Gothic castle was rebuilt, with regard to the natural conditions, to satisfy the Renaissance magnate\'s desires. Far-reaching adaptations and the extension of the Upper Castle (Castle No. 59 - Upper Castle), were carried out by Italian builder Antonio Drizzan, called Vlach, and later by the court builder Baldassare Maggi d\'Arogno. The painting works of interiors in the IIIrd and IVth courtyard were probably entrusted to the Rosenberg court painter Gabriel de Blonde. Paintings in the Little Castle and the castle tower are the work of another painter who was in the service of the Rosenbergs, Bartoloměj Beránek-Jelínek. The Krumlov castle residence also had an extensive network of covered corridors that led through the roofs of the buildings and created a passageway leading from the ruler\'s chambers in the Upper Castle as far as the monasteries and manorial park in Nové Město (Connecting Corridor). The constructions were also carried out in the lower and upper parts of the castle park, and a new game park was set up. The year 1588 saw the last adaptations of the castle by Wilhelm von Rosenberg. At that time, Baldassare Maggi was to carry out a far-reaching reconstruction of the buildings around the IIIrd Courtyard of Český Krumlov Castle and the IVth Courtyard of Český Krumlov Castle, where he was to unify walls, enlarge windows, build new chimneys, modify staircases and doors and adorn courtyards with new paintings. 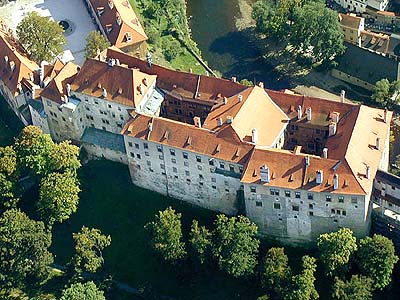 Vilém\'s outstanding political career as well as his personal achievements could not completely compensate for the fact that none of his marriages produced a longed-for male child, and the twilight of the Rosenberg family slowly began. Wilhelm von Rosenberg died in 1592 and the property was taken over by his younger brother Petr Wok von Rosenberg who did not interfere in politics much but was rather known as a passionate collector of books, works of art and many curiousities. It was his thirst for knowledge that ranked him among the most educated lords of his time even though he hadn\'t been given as systematic an education as had his brother. Vilém\'s political career had its dark side in the vast sums of money which the distinguished Rosenberg had to spend on his prestige, and he left his brother a dominion burdened by huge debts. As much as Petr Wok tried to preserve the family property in its original form, he was forced under the pressure of lenders to sell some of the estates. It was with a heavy heart that Petr Wok, after the death of his wife Kateřina von Rosenberg neé von Ludanice, decided in 1601 to sell the old family seat in Český Krumlov to the Emperor Rudolf II. von Habsburg and move to Třeboň. The Emperor never visited the castle in person. Only in the course of 1605-1609 did Krumlov become the seat of Rudolf\'s illegitimate child Julius de Austria and the place of his tragic fate. Český Krumlov was no more the aristocratic residence, administrative and social centre of the extensive dominion that it had once been. In 1610, the Ist courtyard was struck by a great fire. The troops of Passau occupied the town in 1611. During the Uprising of the Estates the commander of the imperial garrison Ferdinand Carrati de Carrara had a massive fortification with bastions built around the IInd courtyard. In 1622, the Emperor Ferdinand II. von Habsburg Eggenbergs. 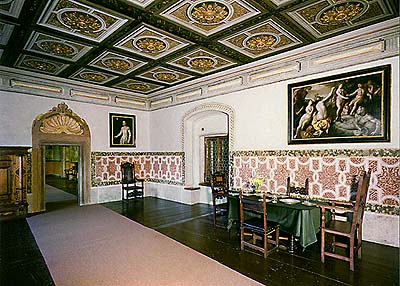 Renaissance interiors in their allusive form are included in the No.I Guided Tour of Český Krumlov Castle and open to the public.