Location :
This house is a part of former farm buildings which follow the line of the old settlement walls and probably date from the 14th century in the Ist Courtyard of Český Krumlov Castle. 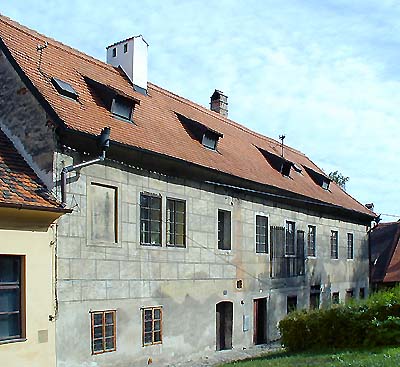 Description :
The structure is formed by three separate parts, the main part being the eastern one. It is a two-storied building with a small courtyard. The next two parts, today garages, are only single-storied with a relatively high floor level.

History of the formation :
The central and western parts testify to the radical modern changes, mainly applying to the structure and facades. The bricked-in window indicates that the original level of the ground floor was about 110 centimeters lower. The eastern part is evidently the oldest of the three, and many modern changes were implemented here as well. For example, a staircase to the first floor and gallery were built in 1920. The first floor is now occupied as living quarters.

Remarkable architectonic details:
There is a sun-dial on the Renaissance sgrafitto facade which dates to 1690. 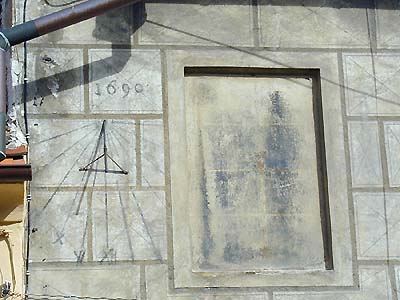 History of the inhabitants :
The name of the Krumlov burgrave and later regent of the Wilhelm von Rosenberg domain, Jakub Krčín of Jelčany and Sedlčany, is mentioned in 1579 in connection with the building. Around 1624-1625 beer-brewing was moved outside the castle grounds and the building was modified into artisan living quarters and workshops, granaries and storage houses. Mentioned among the artisans were a wheelwright, joiner and slater. In the late 19th century a dairy was also installed here, where butter and cheese were made. Since 1948 there have been garages and a car repair service.

Legend :
In this house people used to hear a strange knocking at night, as if a barrel-maker were tapping on a rim. According to legend, it is said that one very diligent barrel-maker had to grow his own reeds for waterproof the barrels in the lake in the castle gardens. Through some unlucky accident, though, he fell out of his boat and drowned. He thus couldn\'t fulfill his task to which he had obligated himself to the castle nobility. The poor barrel-maker couldn\'t find peace even after his death, and on full moons he appears in the workshop of the brewery to finish his task.