Location :
This corner building of the former salthouse stands adjacent to the Red Gate, the main entrance to the castle grounds. On the northern side the building closes into the Ist Courtyard of Český Krumlov Castle. 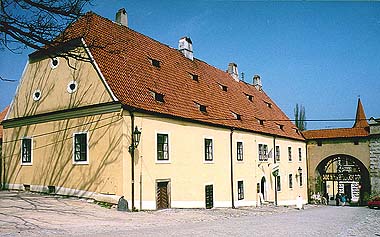 Description :
The structure\'s immediate point of interest is its high guttertile roof. The building is single-floored without a basement, and at one time the attic contained the connecting corridor leading from the castle to the Minorite monastery. The basic groundplan is regular, which tells us that the structure was built in one stage for a specific function.

Historical building development :
The original style of the period of construction is evident by the interrupted Gothic portal as well as the analytically marked smaller windows from the same period. The individual rooms of the ground and first floors were originally for the purpose of storing grain. Other Gothic granaries from the turn of the 15th-16th centuries are known to us, for example, from the castles at Bechyňe or from Švihov. The building finally underwent its first modifications in the 18th century, when around 1723 the attic construction was changed and the roof covered by guttertiles. The construction of a new attic is documented from 1753, and this attic remains up to the present. In 1875-6 the building was adapted into a three-wing construction with a central corridor. At the same time, the entrance portal was relocated from its original position at the right side of the building and placed in its present location. In 1939 a major part of the building was reconstructed and a boiler room was installed. The building was again adapted in 1946 for office spaces.

History of the residents :
The first documentation, albeit unreliable, about the building\'s existence is from an undated inventory of estate buildings in conjunction with the sale of the estates by Peter Wok von Rosenberg to Emperor Rudolf II. von Habsburg in 1601. The building is mentioned here as a storehouse for horse feed. It evidently burned down in 1610 together with its neighboring Castle No. 56, but there is no written documentation of this. During the entire 17th century, we have only sporadic information about the very existence of the feed storage. At the beginning of the 18th century the building changed functions in context with a change in the traditional salt trade route. The new route led through Krumlov, and the ground floor of this building was adapted into the necessary storage space. At the end of the 18th century salt storage was discontinued here, it lost its function as a granary, and it remained practically empty. The house was converted in 1876 into residential usage with four service flats. It served this purpose until 1946, when the interior was rebuilt into office spaces and used for the needs of Public Security.

Legend :
It is said that this house is haunted, and some people who have slept here have experienced anything but a peaceful night\'s rest. Those responsible for this are said to be two guards who used to watch over the salt here who, to pass the time and relieve the boredom, often played dice. One of them tended to win quite a bit and the other, who had only bad luck, evidently turned evil and want to take revenge. It turned into a vicious fight between the two guards, and both of them, filling the house with shouts of rage, ended up killing each other. Today you can sometimes hear the sounds of a fight, enraged voices, and sighs of the dying.

Contemporary use :
Today the spaces on the first floor are used as rental offices for the daily newspaper Českokrumlovské listy, The updating centre of the Official informative system of Český Krumlov region and the firms and Ipex. On the ground floor is a newly-established Unios Tourist Service and Internet Café.