Location:
The tower, surrounded by the residential palace of the Little Castle, is situated on a narrow rocky promontory towering above Latrán and the Vltava River between the Ist and IInd Courtyard of Český Krumlov Castle. 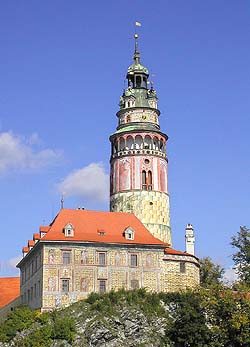 Description:
This is a rounded six-storied tower. The lower part (first two stories) is much wider and is separated from the upper one by the cornice, with the original ceilings dating from the 1580\'s. The facade is decorated with illusively painted architecture. The second floor has a rounded ceiling as well. The ceiling above the third floor is a simple joist ceiling with a porthole and rounded windows with semicircular vaulted niches placed in the circular stonework. The belfry is on the fourth floor, where four bells are set on the bell supporting construction located in the high ceiling room. The fifth storey is an arcaded barrel-vaulted gallery with triagonal segments. The corridor passes upwards through the Renaissance portal into a segmental hutch-vaulted room. The room with the clock is situated on the sixth floor and is lit by small rounded windows. Above the simple joist ceiling is a garret with the lower part of the truss. On the top of the tower is a lantern with bells. 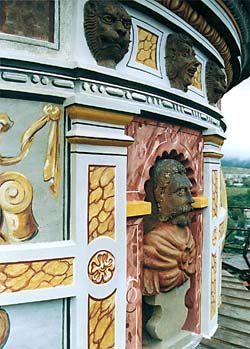 Historical building development:
The origins of this structure are partly Gothic and partly Renaissance, as is evident from the tower\'s external appearance. The tower as well as the Little Castle is a segment of a structure dating from the first half of the 13th century. The oldest part of it is the groundfloor and first floor. The origin of the second floor is around the 14th century, while the third floor is part of the Renaissance belfry. We can not eliminate the Gothic origin, however, due to the bell dated 1406. Under the architect Baldassare Maggi of Arogno, the castle was remodelled and converted from a plain Gothic palace into a Renaissance residence, and the tower was provided with an arcaded gallery at the top in 1581. In 1590 the tower was decorated with mural paintings and figural and architectural motifs by Bartoloměj Beránek - Jelínek. In 1947 an ambitious reconstruction of the tower was realized. In 1994 - 96 the paintings and murals underwent reconstruction as well. 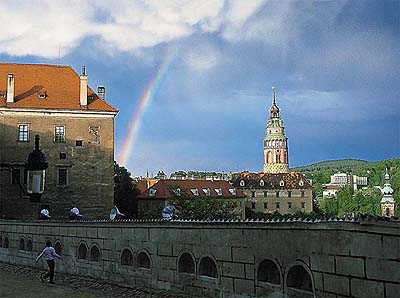 Significant architectural details:
The Tower is the symbol of the town of Český Krumlov, of its history and beauty. It is "The towerest of all towers" as once characterised by Karel Čapek. There are many remarkable details in the tower and Little Castle to see. 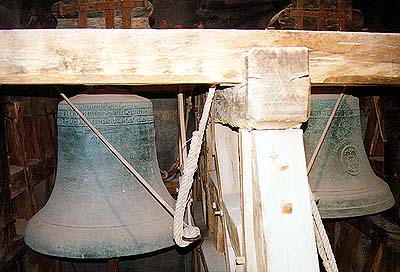 Current use:
The tower is publically accessible and offers a beautiful view over Krumlov and surroundings. (see Tourist Service within the Český Krumlov Castle Complex).