Wall Paintings in the IVth Courtyard of Český Krumlov Castle

The origin of the Wall Paintings in the IVth Courtyard of Český Krumlov Castle dates to around the year 1588. It was done in the context of the adaptation headed by Wilhelm von Rosenberg, (see Renaissance Reconstructions of Český Krumlov Castle). All walls, as in the IIIrd Courtyard, are covered by painted bossage-selfish freestone masonry broken down by zones, with scenes on oval fields alternating with large zones decorated by niches, where painted statues stand. The expressive narrow zone, with motifs of imitation stone vaults, confines the Wall Paintings.

Figural pictures in zones between the floors are destroyed, with some small exceptions, or partly damaged to such an extent that it is impossible to identify their theme. The diagonal tablets probably represent scenes from Antic Mythology and from Metamorphosis by Ovidius. 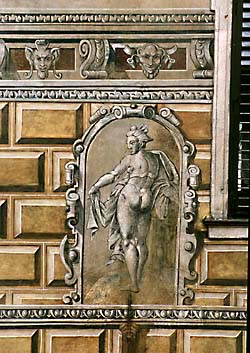 Allegories of the five Senses are illustrated on an oblong field between the first and the second floor. The most distinct is the allegory of Touch and Smell. The men-at-arms of the first floor niches, on the eastern and northern walls, are hardly recognizable. The Charities are probably standing in the three niches of the southern wall. On the eastern wall, there is a man-at-arms and a woman with a tree twig. Probably the statues of the Planets, Saturn, and Sol are in the second floor niches of the eastern wall while Mars, Venus, and Mercury are placed on the southern part. They are probably the same figures as are recognized on the walls of the previous courtyard. A man in a costume of the period, perhaps an artist or a donator, is standing behind the later made extension of the eastern and southern wing corner conjunction. The painter placed the allegories of Belief, Hope, Love, Temperance, Power, Wisdom, and Justice into seven niches of the northern wall. The connecting theme of all paintings is nowadays difficult to distinguish. There are more colors used in these paintings than in comparison with the previous courtyard. Besides the main basic shades of gray, black, ochre, and red-brown, there are green and blue colors used as well. That, along with the fact that the architectonic elements are spread, as it was evidently built without a common relation and order, reduces the reliability of a proper link imitation. On the other hand, in comparison with the IIIrd Courtyard, the Figural Painting is more alive and more ornamental, maybe due to the quality of the models. The author of paintings is unknown, but he could have come from France or from the southwestern part of Germany, judging by how the Paintings were provided