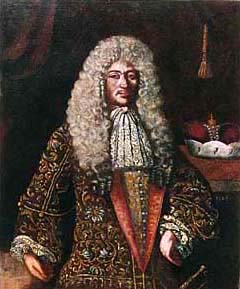 From the mid 17th century, when the Krumlov dominion passed into the ownership of the Eggenberg family, interest in world theatre among the castle society increased - thus the first permanent theatre scene was built in the so-called Deer Hall in 1675. The Salzburg architect Johann Martin Schaumberger equipped it with a total of fifteen scene changes, including four decorative halls (gold, red, blue, and stone), plus a kitchen, a forest in summer, a forest in winter, a garden, rock cliffs, an ocean, city, village, military camp, heaven, and hell. The physical dimensions of this theatre evidently didn\'t suit the demands of the royal owners, so in 1680 the great lover and supporter of the arts Prince Johann Christian I. von Eggenberg had a new independent theatre building built on the Vth Courtyard of Český Krumlov Castle. The theatre layout and construction work was directed by the Italian builder Jakub Maggi and Petr Spinetta, the decorations were again painted by Johann Martin Schaumberger, while the carpentry work on the roof and construction of the stage machinery were executed by Laurentinus Khünmüller. At this time, a permanent musical ensemble was active in the castle (see Eggenberg Band) as well as a professional drama company (see Eggenberg Actors). An extensive Eggenberg Collection of Theatrical Items and Repertoire has been preserved in the Castle library in Český Krumlov. 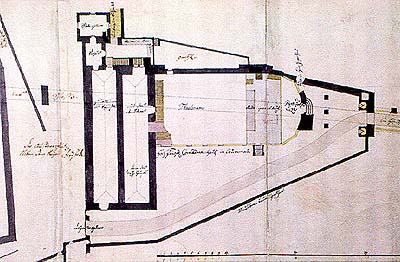 About the outfitting of the Eggenberg theatre we have no more preserved information. Even so, we can still get a rough idea of the layout and usage of space from two plans drawn up in 1760 as a basis for a proposal by the master Joseph Franz Fortini for the reconstruction of this theatre, as its condition was evidently quite bad by that time. From this plan, it appears that in the western part of the structure was the scene (Theatrum) with a relatively extensive stage area, expecially in comparison to the auditorium with parterre (Gemeines Auditorium) and royal box along the entire width of the rear part. Between the stage and auditorium was a rectangular area for the orchestra (die Music).