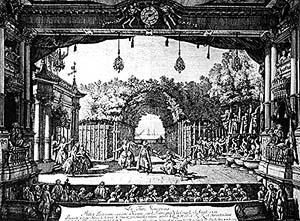 The composition and seating of an orchestra in the 17th and 18th century is essentially different from what we are accustomed to today. Most notably, the orchestra was not conducted in the modern sense of the word. The conductor sat at the harpsichord and together with the first violinist directed the whole orchestra with his playing. This method of direction understandably influenced the seating arrangement of the musicians. The harpsichord was included twice in most orchestras, and both instruments were placed facing each other on both ends of the orchestra pit. The other instruments formed two rows between the harpsichords; the first row consisting of the 1st violin, violas and oboe sat facing the stage, and the second row consisting of the 2nd violin, violas and oboe sat facing the audience. The bass instruments, forming together with the harpsichord the rhythmical element of the Baroque orchestra (basso continuo), were separated and placed with both harpsichords.

The orchestra pit of the Krumlov theatre is interesting in that the unique double-sided music stand has been preserved here, its form and size corresponding to the above-mentioned orchestra. So far it has also been possible to use original Baroque lighting methods in the orchestra pit; these methods are used most often during Trial performances in the Castle Theater. 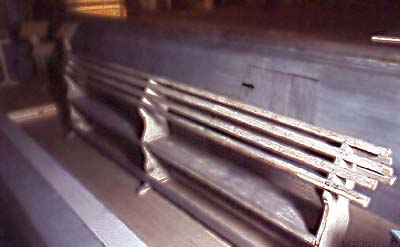