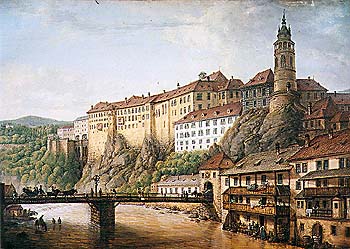 The events of the French Revolution, the Napoleonic Wars, and the introduction of a new style of art - classicism - caused considerable changes in attitudes, views, and values of human life at the end of the 18th century. Two brothers, Joseph zu Schwarzenberg (1769-1833) and Karel I. Filip zu Schwarzenberg (1771-1820), grandsons of the Baroque Lord Joseph Adam zu Schwarzenberg, experienced all those changes. In the year 1802 they divided the family property into two parts. The elder Joseph became a founder of the first family lineage - the primogeniture, which from that time on owned the Český Krumlov Castle and Hluboká Castle as the main family seats. The younger Karel I. chose as his family seat the Orlík Castle which the second family lineage - the secundogeniture - resided in from that time on. Karel I. zu Schwarzenberg made a name for himself as a successful general and diplomat during the protracted period of the Napoleonic Wars. The elder Joseph zu Schwarzenberg managed to maintain economic prosperity of the Schwarzenbergs\' dominion not only during wartime but as well after the division of the family property. Within his estates he began to provide education to qualified specialists in order to ensure administration and management, especially of farming and forestry. In 1800, he founded the school of forestry in Zlatá Koruna and a year later the Schwarzenberg Economic Institute inside the castle premises. One of the area\'s most interesting technical works, the Schwarzenberg Navigation Canal, used for floating logs from Šumava forests to Vienna, was completed under the rule of Joseph zu Schwarzenberg. 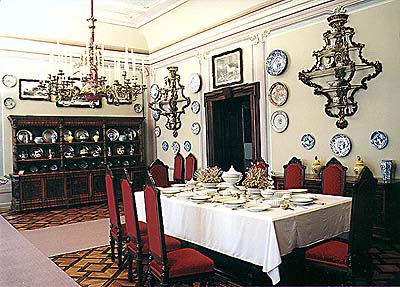 It was in England, which Johann Adolf II. and his wife Eleonora had visited several times, that they found a fountainhead of boundless inspiration. Based on the design of the late Gothic seat of Windsor, they had the Hluboká Castle remodelled in fashionable neo-Gothic style and took their permanent seat there from the mid-19th century. Building activities ceased in the castle as well as the town, and the place was essentially deserted. During the 19th century no significant exterior adaptations in the castle complex were carried out, although many interiors were furnished with stylish equipment enhancing the period atmosphere.

Interiors of the 19th century in their original form are included in No.II. Guided Tour of Český Krumlov Castle and open to the public.