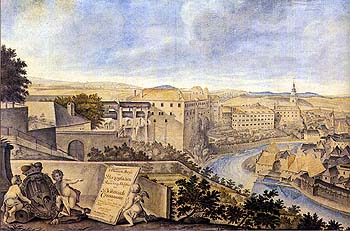 In 1622, the Emperor Ferdinand II. von Habsburg donated the dominion of Český Krumlov to his financier Johann Ulrich von Eggenberg (1568-1634) for services rendered. Neither Johann Ulrich nor his son Johann Anton I. von Eggenberg (1610-1649) settled into Czech environment or made their seat in Krumlov. However, the Eggenbergs were in the Emperor\'s favour at that time and received many honours. In 1623, the Eggenbergs were raised to the estate of imperial princes; in 1625 they were given the so-called great palatinate - among others the right to coinage - and in 1628 the Krumlov dominion became a principality holding the title of Duchy. It was not until the rule of Johann Christian I. von Eggenberg (1641-1710) and his sophisticated wife Marie Ernestine von Eggenberg (1649-1719) that the Český Krumlov Castle became the residential seat of the family. They were particularly fond of theatre and music but they also took interest in visual arts and the castle library. At first, plays were performed in the castle\'s Deer Hall (today\'s Masquerade Hall) and in 1689, a separate theatre building with a permanent ensemble began its operation behind the Cloak Bridge next to the so-called Renaissance House (Eggenberg Castle Theatre in the 17th century).

Johann Christian and his wife had the whole complex of the castle residence adapted according to the fashion of the period. The founding of the Castle Baroque Park according to designs by Jakub de Maggi and Petr Spineta dates at the end of the 17th century. The reconstruction of the Upper Castle (Castle No. 59 - Upper Castle) was also carried out. Large-scale adaptations as well as enlargement of the interiors were made. Each storey was levelled out to unify halls to the same level, and massive Baroque staircases were built. The original square Gothic tower was taken down and a new wooden Cloak Bridge was founded. The building of the Mint (Castle No. 59 - Mint) enriched the IInd courtyard. 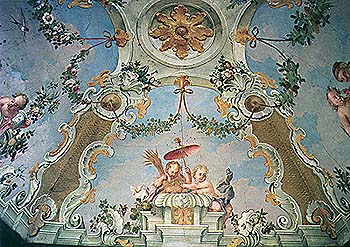 Because the male side of the family died out, Princess Marie Ernestine, Johann Christian\'s widow, left the property to her nephew Prince Adam Franz zu Schwarzenberg (1680-1732) who took it over in 1719. Through the merger of the Eggenbergs\' and Schwarzenbergs\' property an extensive dominion was created which was reminiscent of the Rosenberg era in its size. Concerning the personality of Adam Franz, the dominion fell into the hands of a real Baroque cavalier, a man who was successful at the imperial court as well as a generous patron and passionate hunter. The dominion of Český Krumlov again received the title of Duchy (1723). His career was at its peak when Adam Franz met his death through an "accidental" bullet wound from the gun of Emperor Charles VI. during a hunt near Brandýs nad Labem (1732) (see Imperial Hunt). The Duke Joseph Adam zu Schwarzenberg (1722-1782) under the guardianship of his mother Eleonora Amalie von Lobkowicz took charge of the property. Joseph Adam also achieved rapid political and social growth at the imperial court. Perception and enjoyment of the courtly atmosphere as well as creativity typical of the culmination of the Baroque and Rococo periods resulted in far-reaching architectural remodellings of the Krumlov residence. In addition to the reconstruction of the St.George\'s Castle Chapel and the addition of another storey of the castle residence, the Upper Castle boasted new designs in the splendid Masquerade Hall and Mirror Hall (History of the Hall of Mirrors). The Masquerade Hall was adorned with delightful paintings by Josef Lederer while the decoration of the Mirror Hall was the work of two Viennese painters, Hans Wetschl and Leo Märkl. Both halls were part of an extensive complex that had been designed for entertainment and enjoyment. Concerts used to take place in the Mirror Hall whereas the Masquerade Hall was used to hold balls and masquerade parties. The wooden corridor of the Cloak Bridge led directly from the Hall into the remodelled Castle Theatre in Český Krumlov. Prince Joseph Adam zu Schwarzenberg had the old building of the Eggenbergs\' theatre rebuilt and furnished with a vast range of scenes and wings, costumes, stage props and theatricals. The Connecting Corridor led to the ingenious bush labyrinth in the 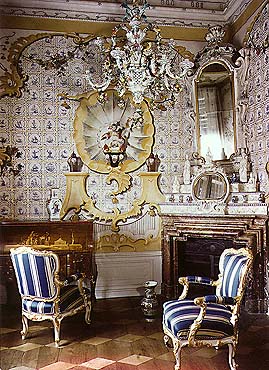 Castle Gardens in Český Krumlov. The park was provided with new cascade fountain, decorated with statues of water deities by sculptor Josef M. Grissler from 1765. In the course of 1755-1757, the Summer Manor Bellarie was rebuilt, while in 1752 a wooden bandstand decorated by František Jakub Prokyš. was established at the back of the park. The end of the park was covered by a large pond that supplied the water machine in the nearby Little Bird Castle with water. The park passed into a wide boulevard leading towards the Kvítek Dvůr which was remodelled in Rococo style in the years 1750-1752. Between 1744-1746 the winter Castle Riding Hall (Castle No. 178 - Castle Riding School) was built near the castle according to a project by Andreas Altomonte. At the end of the 18th century building activities in the castle came to a close.

The Baroque interiors evoking a period atmosphere are included in the No.I Guided Tour of Český Krumlov Castle and open to the public.